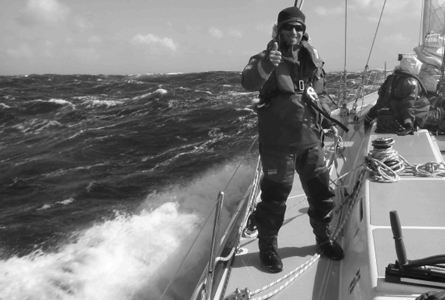 Sailing champ Richard Hewson ('97) hopes to accomplish his dream of winning the toughest race in the world and compete in the 2015 Mini Transat:

'It is 2am, pitch black and dark from the new moon. The wind is howling through the rigging and your 6.5m performance racing yacht is surfing down an 8m wave. There is no time to eat and sleep would be a luxury. To win means to first survive and to survive you must stay in control. This is ocean racing at its best!

You would have to be blind not to have noticed the recent campaign by Hugo Boss as skipper Alex Thompson walks up his mast and then jumps off. To many sailors Alex and his Hugo Boss campaign mark the pinnacle of solo offshore racing. Alex is racing an IMCO 60 class yacht and is the envy of just about every solo racer on earth. It takes a lot of hard work and good luck to get to where Alex is in the world but like most sports there is a formal ‘pecking order’ that can increase your chances of making it to the top of the sailing world and over the past year I have been working my way up this ‘order’.

Australia has proven itself to have some of the best sailors in the world and over the years Tasmania has supplied its fair share of racing talent particularly in the professional offshore sailing circles. The question is often asked why Australia does not have an America's Cup team, Volvo 60 team or entrants in the Vendee Globe Race and the answer is that we definitely have the talent but despite Australia's fortune and wealth there is little available sponsorship or philanthropy that we see in other parts of the world.

Over the past years I have been lucky enough to sail on some amazing yachts and also with some amazing people such as the likes of Brian Thompson on his IMCO 60 yacht Estrella Damn. In 2010 I was selected as skipper for the Clipper Round the World Yacht Race and subsequently went on to win an amazing 12 out of 15 races, breaking many records including those first set by Alex Thompson who I have already mentioned.

After spending over 11 months in 2011 and 2012 racing around the world on a fully crewed yacht and very close living quarters in the Clipper Race, I decided that I would follow the lead of many great men before me and focus on solo sailing. That decision was the easiest part of the entire process for offshore racing and what would follow was an insane amount of work just to get to the start line of a solo race. I would start my career in solo sailing in a Mini 650. What is a Mini 650? Well if IMCO 60s are the Formula One of sailing then I guess the Mini 650 is the go-kart. The Mini is a breeding ground for the next generation of solo sailors and is basically a state of the art 6.5m yacht that is designed to be sailed across the Atlantic Ocean solo in the Mini Transat Yacht Race.

The Mini Transat Yacht Race is one of the most exciting and extreme ocean races in the world where 84 of the world’s best sailors from 18 different countries race over 4000nm solo across the Atlantic in a fleet of 80 high performance 6.5m racing yachts. To give the average non-sailor an idea about the Mini Transat Yacht Race it is six times as long as the Sydney to Hobart. The racing yachts are half the size of the smallest boat in the Sydney to Hobart Yacht Race, or about the same size as your family car, in conditions that are on par if not worse than the Sydney to Hobart. To make it even more fun we sail the boats solo, eat freeze dried food, poop in a bucket, remain constantly damp and get no sleep. In other words the Mini Transat is to sailors the Mt Everest of sailing.

After endless emails and meetings straight after the Clipper RTW race in late 2012 I managed to secure a part sponsorship with G Yacht Design and Katabatic Sailing who were a new company that had just released their brand new boat called the RG650. This was a brand new and untested Mini 650 yacht and I had basically signed on to become their ‘test pilot’. An arrangement was made for me to continue to work to find funding for the Mini Transat season while racing the boat in as many regattas as possible. The season to follow would involve awesome sailing but some very frustrating times trying to find the finance to support the campaign and also some frustrating times on the water. I was starting races and taking the lead very early on only to have a setback due to gear failure close to the finish of each race. We still had a lot to learn about the new RG650 yacht with the main education being how hard we could push it before it actually broke and how to strengthen the boat so it would not break any more. To complicate the issue even further we were working on an almost non-existent budget. We were so focused on our goal for the 2013 Solo Trans Atlantic Race that any money we made would go straight into the campaign. I remember laughing about the fact I was sleeping on the boat which is the same size as your typical family car with no mattress, eating two minute noodles for dinner and walking around in bare feet in the pouring rain because I didn't have the spare money to buy shoes or get a taxi, yet I would go to the distributor or yacht chandler and spend 600 euro on parts for the boat that I needed to race! By the end of the season the sacrifices we had made were worth it and I was achieving top results in the internationally recognised class and I was confirmed to be qualified for the start line of the 2013 Mini Transat.

After numerous delays due to bad weather in November 2013 I was amongst 84 of the world’s best solo sailors starting the 2013 Mini Transat from Douarnenez in France. Given the later than usual start to the race the weather was hideous. Within two days three boats had been lost and many people had pulled out of the race. Having grown up sailing in Tasmania I was in my element. I was actually enjoying the 30-50kt winds and 6m seas and the boat was going like a freight train while my competitors were being left behind with broken boats and sea sickness. With only 40nm to go before the finish of the first leg of the race I was winning by over 10nm when we heard the news that the French race officials had called the race off and we were being diverted to a safe port due to extreme weather forecasts. Whilst disappointed with this decision I was happy that I had proven the new boat and I was winning the race earning mutual respect from my fellow international yachtsmen.

There were further delays as we waited for the next weather window to start the race across the Atlantic to Guadalupe. Finally the race was restarted from Sada and we battled our way down the Spanish coast. Luck was definitely not on my side for the second race and while working my way into a tactical position that would potentially win me the race I had the misfortune of damaging my keel and rig in a series of incidents that were beyond my control. It is not in a Hutchins Old Boy’s mentality to just quit and despite constant setbacks I continued to repair my boat and race as hard as possible to catch the now distant leaders. To cut a long story short, there came a time where the amount of gear repaired on the boat outnumbered the amount of gear in its original condition. I had removed, rebuilt and re-affixed my keel; my mast had been broken in two, re-welded and put back in the boat; my spinnaker pole had been replaced a dozen times; I had broken and fixed rudders, re-spliced the rigging and basically re-wired the entire boat’s electronics. I was mid-Atlantic off the coast of Lanzarote when I made one of the hardest decisions of my life to abandon the race while I still had the option of reaching safety. I can't remember ever having to quit something or never finishing a game so this decision was at the time a very difficult one to make but it was also the decision to avoid a potential life and death situation.

My school years at Hutchins taught me to never give up and there is a familiar saying that comes into my head every time life get tough, "Vivit Post Funera Virtus". We are only on this earth for a given period of time and I am still living every day of my life to accomplish the dream of winning the toughest race in the world and to be on the start line for the 2015 Mini Transat. I am already qualified from my last few years of racing on the European circuit so the only factor to accomplish now is to find a new sponsor. Our devotion to the 2013 race has used all the funds I had personally available and all the funds from my sponsors, however provided I can find the 40,000 euro to buy my boat AUS816 from my previous sponsors before May 2014, I will be guaranteed to be on the start line of the 2015 Mini Transat. So if you are interested in some invaluable publicity in Europe and want to be involved in an amazing race then please contact me and find out how you can get involved. It is possible that during 2014 and 2015, and who knows perhaps in the years to come, we will have a Hutchins Old Boy attracting the world’s attention by performing publicity stunts similar to Hugo Boss.'