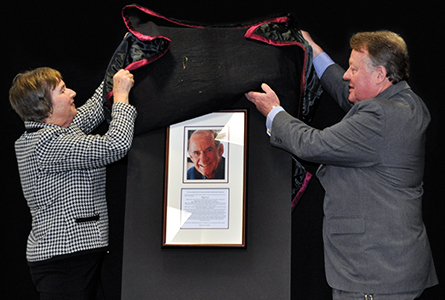 Old Boy and highly regarded member of the Hutchins community Max Darcey has been honoured with the opening of the ‘Max Darcey Room’.

Below is the speech made by Headmaster Warwick Dean to guests at the Room Naming Ceremony.

Max Darcey entered the Hutchins Senior School in February 1948, Student no. 4032 on a Chorister’s Scholarship from St David’s Cathedral. He immediately made his mark in Scouting and Rowing.

After joining the Hutchins School (3rd Hobart) Scout Group, he was presented in his first term with the maroon shoulder badge which marked his entry into the Senior Scouts.

‘Our mighty atom’ also coxed the First IV, the Stephens House crew and the Derwent Rowing Club crew (his father, Tom, was an Olympic coxswain in London in the same year), gaining his First Colours for rowing before the end of his first year at the School.

In 1949 Max came second in the U14 33 metres breaststroke at the House Swimming sports, as well as coxing the First Crew.

By 1950 he was Secretary of the Stamp Club and had tied for the position of Junior Impromptu Orator in the Literary and Debating Society competition.

In that year he won the U14 55 yards breaststroke race at the House Swimming sports and took second place in the U15 race; he also gained Second Colours in Athletics and Football.

As well as coxing the school crew – who ‘valued his advice and experience highly’ – he coxed the Old Boys’ crew to victory by six lengths.

By 1951 Max was Captain of Boats, and being described as ‘confident, efficient and helpful to both crew and coach’. He was also a member of the First Football team, the Inter-school Cross-Country team, Stephens House Cricket team and the Library Committee. By year’s end, he was a Probationary Prefect.

In 1952 Max was a Prefect and a member of the Sports Committee, Captain of Boats, Vice-Captain of Football and Stephens House Captain of Swimming and Lifesaving. In that year he was awarded First Colours for Swimming, Cricket, Rowing, Football and Cross-Country, and won the P. K. Rogers Memorial Prize for Best All-Round Athlete. In the Schools Board examination of 1951-52 he gained seven points, with three Passes and two Credits.

In 1953 Max was a Prefect, Captain of Stephens House, Captain of Football and a member of the First XI Cricket team. Cadet M. G. Darcey won the House Rifle-Shooting competition and qualified for the Inter-squadron Neil Watchorn Perpetual Trophy, also in Rifle-Shooting. He was also a member of the Stonehaven Cup team, helming the boat ‘Conchra’. Perhaps as a result of spreading himself across too many activities, he gained only a  Lower Pass for Chemistry in the Matriculation examinations of that year.

Unsurprisingly, Max Darcey was elected Captain of the School and Senior Prefect for 1954. He was again Captain of Stephens House and House Captain of Swimming, Cricket, Football, Athletics and Standard Athletics. A member of both the Games and Magazine Committees, he was also Captain of the school Cricket and Football teams, and represented Tasmania in the Stonehaven Cup sailed off St. Kilda, Victoria, in January. In cricket he was selected for the Southern Combined Public Schools cricket side, played for the School against the Old Boys, and was congratulated at the end of the season for not once losing the toss. He represented the school in Lifesaving. As well as gaining his colours for Swimming, Cricket and Football, he was awarded a Cap for the latter. In Cadets he was promoted to Lance-Corporal, then Corporal. He won the House Rifle-Shooting competition. He was thanked publicly for his able and willing assistance at the Sub-Primary sports, which had inspired the younger students: ‘Our great ambition now is one day to be a prefect’.

Max matriculated in 1954 with a Lower Pass in Applied Mathematics, a Credit in Maths A and two Higher Passes in Physics and Chemistry, for which he gained a Commonwealth Scholarship to attend University. He was awarded the Bishop’s Prize for Captain of the School and won the John Player Memorial Prize for character, courage, leadership, determination and example. That summer Max finished second in the Stonehaven Cup, sailed in Perth, and was recognised for his excellent all-round performance in the Past v. Present students’ cricket match. His parting gift to the School had been a copy of Gods or Flannelled Fools, written by well-known Australian cricketer, Keith Miller.

After leaving school Max became a surveyor and continued his busy lifestyle, involving himself with many community service organisations. His dedication to serving the school was exemplified by his being instrumental in the formation of the Hutchins Foundation and his ten years of service on the Hutchins Board of Management, culminating in his Chairpersonship from 1977–79. He also served as both long-term member and Chairman of the Collegiate Board of Management.

Max died after a long battle with a rare blood disorder on 17 August 2011 and it is fitting that we recognise his legacy to The Hutchins School. There is good reason to attribute our motto Vivit Post Funera Virtus to Maxwell George Darcey.

In all respects, I knew Max as a thorough gentleman and a tireless giver of himself to others. His contribution to the growth and success of The Hutchins School has been outstanding and it is with pride and pleasure that we today name this trophy room ‘The Max Darcey Room’ with recollections of fondness and gratitude. Max was indeed a special role model and inspiration to many and it is our wish that the perpetuation of his name will continue to be an inspiration to future generations of our Hutchins community.