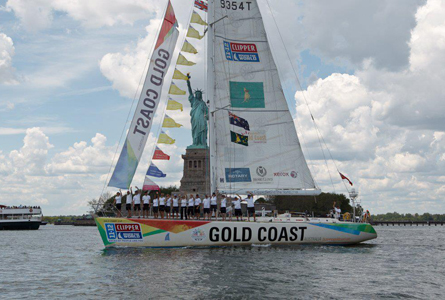 Old Boy Richard Hewson (’97) has written this letter sharing his adventures on the ocean with the Hutchins community:

I have recently sailed back into UK waters as we completed our circumnavigation and race around the world in the Clipper Round the World Yacht Race.

I was the skipper and navigator of the Dubios 68ft Gold Coast Australia, and finished in first place overall, scoring a podium position in every race of the 15 race series and winning twelve gold pennant first place positions. Under my leadership my team performed extremely well and worked hard for every win. The records that we set in our year of sailing around the world will be extremely hard to beat in the future.

This was not just a race but an epic adventure. There were 15 races in the series around the world, finishing in 14 countries, and we sailed past many more. We sailed through every main ocean, no less than twenty seas and past thousands of islands. We experienced times of complete calm and times of storm where the waves and seas were scaringly high even for somebody who has spent his life since leaving school at sea. We saw some of the most beautiful demonstrations of the power of the environment and the beauty of the wilderness of the ocean. Unfortunately we also saw the impacts of man’s distractive force on nature as rubbish floated by on its way to the large floating whirlpools of garbage out of sight of land that every ocean holds.

Sailing around the world and seeing so many beautiful places and different cultures, one can not draw himself away to think how lucky we are to have grown up in a place like Tasmania and to have had the privilege of going to a school like Hutchins, where young boys are groomed into successful and adventurous men. Opportunities that were available to me in my youth were often taken for granted as being normal. Opportunities like going for a walk or run in the bushland surrounding your local suburb in the morning, going for a sail on the River Derwent after school and being able to go away camping with friends on holidays without the need for parental supervision are just some of the benefits of growing up in Tasmania. Learning to play as a team, having the courage to undertake tasks others would think impossible, and having the support of lifelong mates are all benefits of being part of the Hutchins community. Thinking of all these things while sailing downwind in a North Atlantic storm made me proud, so proud in fact that I began singing the school song as we surfed downwaves at up to 28 knots.

The lessons I learnt of leadership, management and psychology during this race far outweighed the lessons I learnt as a MCDO in the Navy, as captains of yachts and merchant vessels or while working in the corporate world. To ask a crewmember to change a sail when you are sailing in the southern ocean with Antarctica only a few hundred miles to your south, snow on the deck, and so much wind that the wind instruments have long been blown from the top of the mast (the last recorded reading was 68kts) is not an easy task, yet, these things are a part of ocean racing and the will to win or survive normally reigns over terror or fear. Human psychology is quite amazing and trying to lead your crew to push themselves as hard as they can, and to accomplish what they initially believe as impossible is a hard but rewarding task. But the character of a leader is not something that you can get from a book. Character is set from a young age and for me it began to develop during my Hutchins years.

What many students, parents and members of the community do not realise is that going to Hutchins is not so much about academic education. Ten years after leaving school you begin to realise what is so special about being a part of a school like Hutchins. Being part of a school like Hutchins gives you is character. Character remains with a person for life, and also after death.

Now I have achieved a life long goal, I have not only circumnavigated the world, but I have won a race around the world. So where to now? I will remain in Europe until November sailing in regattas, working on wind farm projects and developing my own campaign to race around the world Solo in a class of 40 foot boats next year. I will return to Tasmania in November and look forward to catching up with some old boys to tell stories and have a laugh.

My next campaign in Class 40 will involve a number of short handed and solo races, the majority of which will be in the vicinity of France, the UK and across the Atlantic ocean to the US. The campaign will culminate with the 2013 Global Ocean Race starting in September 2013. The Class 40s are a very exciting and developing class, but before I compete I will need to raise the required sponsorship to enable me to race. Any person interested in my last campaign the Clipper Round the World Yacht Race or in my next campaign for a Class 40 race around the world can read my blogs or learn more about my races from my website www.hewsonracing.com. Please feel free to contact me at any time using the details provided on my web page.