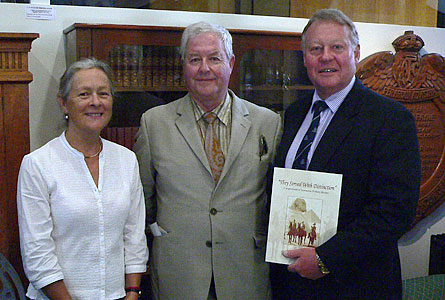 The Hutchins School community takes great pride in nourishing and maintaining and its connection to military history. The School takes great care to continue to remind current students of those who have served their country. Our Archives house a treasure trove of items of national military significance and our Hutchins Lions wall now recognises distinguished Old Boy and acclaimedfighter pilot, Stuart Walch – the only Tasmanian to be recognised on the Battle of Britain Honour Board in Westminster Abbey.

Military HistorianReg Watson has added to our collection – recently presenting a copy of his newest book They Served with Distinction – featuring, amongst others, our newest Hutchins Lion, Stuart Crosby Walch.

Reg is a specialist in military history, and an active contributor to the Hutchins Archives and Heritage Collection. In addition to his new book, Reg has been able to provide previously unknown information on Old Boys. In 2008, Archivist Margaret Mason-Cox supplied enrolment details about two little-known Hutchins soldiers who enlisted and fought in South Africa’s Boer War in 1900. In return he provided more information and photographs of the two soldiers, Robert Doolin and Ernest Evans, both of whom died in that confrontation. Later, Reg very kindly donated a copy of his self-published booklet Heroes All: Tasmanian Casualties in the Anglo-Boer War.

We thank Reg for his continuing role in keeping the memory of these distinguished Old Boys alive.