Our Kinders colour the community 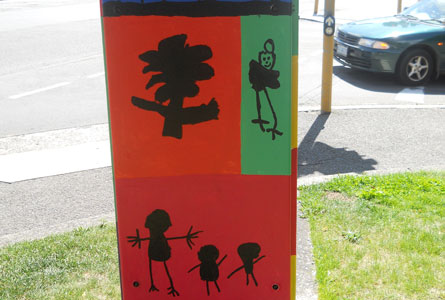 What do Kinder students know that adults don't?

This is a question that was posed by Kinder teacher Mrs Kate Turner to a group of her students last year. The answer they came up with after much discussion is "HOW TO… IMAGINE".

Forty boxes have been offered to artists within the community to paint, with ten of those being offered to school groups. We were allocated the box on the corner of Sandy Bay and Gladstone Roads.

Many Kindergarten boys offered images towards the final design which focused on dreams, wishes and imaginings for the future. Their piece is titled "Childhood Wishes".

The finished project has inspired and captured the attention of many drivers-by and pedestrains. We congratulate Mrs Turner and boys on this imaginative project.