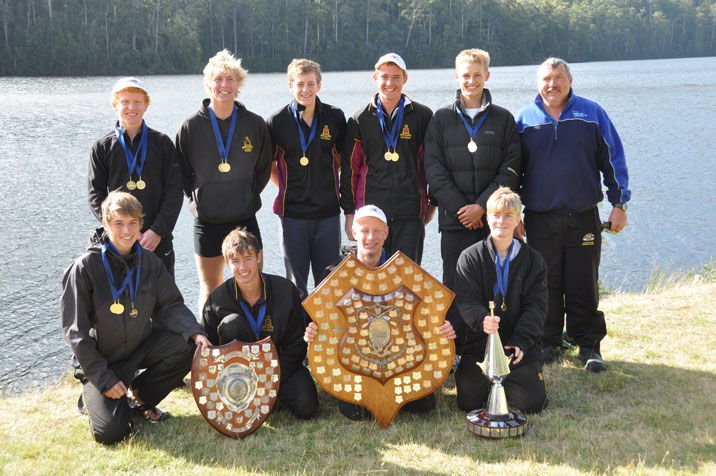 It was an extraordinary weekend for Hutchins crews at this year’s state championships at Lake Barrington, with Hutchins crews sweeping up victories in the men’s eights, pair and single scull races.

In a history-making win, the Hutchins First Eight crew claimed the Senior State Men’s Eights for the first time since the competition began. The Second Eights finished a strong fourth, behind the University and Tamar Men’s crews and well clear of Buckingham. Hutchins also claimed victory in the under 23 men’s under 19 men’s eights. Grade 10 student Riley Grining claimed victory in the men’s under 17 single scull.

Hutchins Director of Rowing, Julian Joscelyne says he’s thrilled with the boys’ efforts. “The success at the state championships is a perfect preparation for the national championships, in which the boys will be competing in the second week of March,” he said.

The school regatta season commences next weekend, with the Southern Schools Regatta at Franklin.

Hutchins congratulates all those who competed in this year’s rowing state championships.

Read more in the Mercury article.

The crew won the mens under 19 eight, mens under 23 eight and the senior mens eight oared championship of Tasmania, believed to be the first time this event has been won by Hutchins. Hunnibell, Tenbensel, Burridge and Backmann crewed together to win the mens Under 19 coxless four. Burridge and Backmann crewed together to win the mens Under 19 pair, each winning 5 State Championships in 2011. This crew sadly lost their coach the Late Roger Drummond who passed away In December and are now coached by the current coach of the Australian mens senior quad John Driessen from Huonville. The crew will row the first school regatta for the year at Franklin this Saturday and then head to Adelaide in early March with a strong Tasmanian team to compete in the Australian rowing championships at Westlakes.