Hutchins student sees "magenta" for a cause 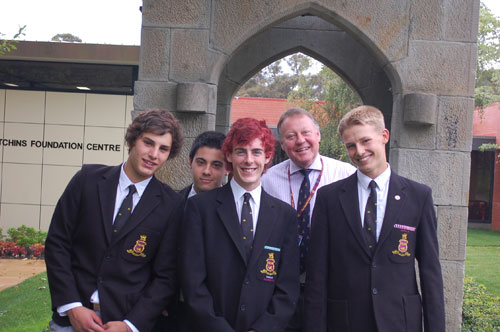 Students of The Hutchins School are well-known around Hobart for their striking magenta and black uniforms.

The School is also known for making sure boys appear as well-groomed as possible – with rules on how uniforms should be worn, and teachers instructed to make sure boys are following them.  But one student is standing out from the crowd …and causing quite a stir.

17-year old grade 12 student Thomas Dobie has been granted special permission to bend the school rules – and has been allowed to dye his hair bright magenta for the World's Greatest Shave fundraising event.

"I know I'll stand out around town over the next month, and I hope I'll encourage people not only to donate, but to sign up to The World's Greatest Shave themselves." Tom said.

Tom has been personally touched by a friend's experience with blood cancer, and is hoping his brightly coloured hair will help raise awareness and funds over the next month.

He had initially hoped to dye his hair the same colour as popstar Rihanna's famous bright red … but The Hutchins School Headmaster Warwick Dean thought magenta would be a better match for the uniform.

"I'm happy to bend the rules a little in this case. Many people in the Hutchins community have been affected by leukaemia and other forms of cancer, and we support Tom in his fundraising efforts."

To help Tom reach his goal of raising $2500 for the Leukaemia Foundation, go to: http://my.leukaemiafoundation.org.au/tomdobie