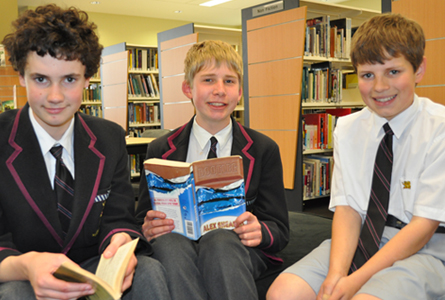 The Middle School Poetry and Prose Competition was held on Tuesday, 18 October.  Initially, all students participated in a classroom exercise for English in which they learned and presented either a poem (Year 7) or a piece of prose (Year 8), after which boys were invited to go to the next stage and compete for the coveted trophy.

The evening was hosted by Allen Chen from Year 12, our Captain of Debating, and adjudicated by Mr John Devine.  The 35 entries were all of an exceptionally high standard, ranging from impassioned speeches to humorous poems, which provided an entertaining and rewarding experience for the appreciative audience.

The Year 7 winner was Stuart Carnaby for 'The Pig' by Roald Dahl; Jonathon Clark-Hansen won the Year 8 award for his marvellous rendition of the short story 'Bootleg', by Alex Shearer, and the overall winner was Max McLaughlin who gave a wonderful performance of 'In Which Kanga and Baby Roo Come to the Forest and Piglet has a Bath' by A.A. Milne.  Honourable Mentions went to Daniel Croser, Will Burgess and Edward Johnstone from Year 7, and James Schmidt, Thor Holloway, Ayrton Rose and Himaushu Hardikar from Year 8.