Musical stars given their chance to shine 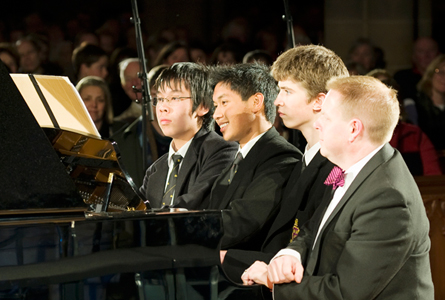 The workshop is open to student composers aged 14 to 26, and Alec's piece, Fantasy for Orchestra is one of only five accepted by the TYO.

The TYO Sinfonia under conductor Simon Reade will work on the piece with Alec and UTAS Composition Lecturer Dr Maria Grenfell on Saturday 1 October.

Alec will work on alterations and adjustments with Dr Grenfell which will be presented at a second workshop on Saturday 5 November.

Some of the pieces will then be performed in the TYO's Christmas Concert in December. Several current and past Hutchins students are regular members of the Tasmanian Youth Orchestra.

This is the second year of the state-wide competition: Jeremy was the only person to make it to stage two in 2010, and has won in 2011.

He will rehearse and perform the Allegro movement of Mozart's Piano Concerto no. 23 in A (K.488) with the TSO on Thursday 17 November. The concert commences at 6.00 pm in the Federation Concert Hall. Jeremy is a piano student of Shan Deng.