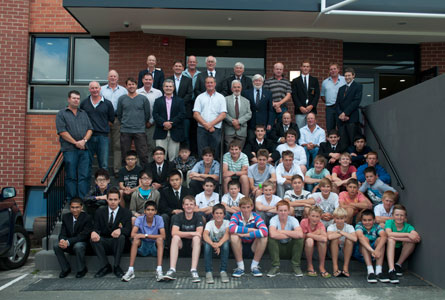 As many of our old boys are aware, Hutchins has offered country boys boarding facilities at the School since its earliest days at the historic Macquarie Street campus in the city centre. The move to the Sandy Bay campus of course saw the second major chapter in boarding history begin, allowing for a new boarding house – Burbury House – to be built at Churchill Avenue. Burbury House has undergone many improvements and expansions over the past few decades.

The most recent and exciting chapter has just begun: a full refit and refurbishment that has seen the re-creation of Burbury House as a world-class boarding facility.

It was with delight that the School was able to invite over 100 members of our past and present Hutchins boarding community to view these changes at the Official Opening on Monday 6 February 2012.

The astonishment of some of our past boarders was unsurprising as they toured the state of art facility – from its spacious rooms through to, the leisure areas (includes a games room and theatre room) as well as brand new bathrooms and domestic facilities.

The Headmaster Mr Warwick Dean and Chairperson of the School Board Mr Lance Balcombe cut the ribbon to celebrate the official opening. Guest speakers, old boys Tom Edgerton and John Hamilton, shared colourful recollections of their time in boarding, with current boarder and School Vice-Captain William Fergusson taking guests through a brief history of boarding at Hutchins.

Guests expressed delight at the new facilities during tours, and enjoyed sharing further stories over a drink.

Perhaps the only disappointment was that some of the old “hidey holes” and escape routes no longer exsisted.

As part of the rich tapestry of boarding at Hutchins, the entire School community looks forward to sharing the new memories boarders will create at the new warm, inviting Burbury House.

Special thanks and recognition to Business Manager Ms Jenny Self for overseeing the project, to all contractors who worked on the site and to Mr John Devine and Mrs Andrea Kooyman for their key role in developing the design concept.