Hutchins wins Head of the River 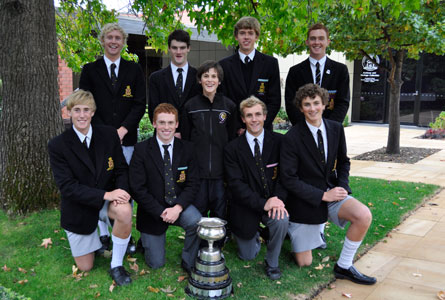 The SATIS Head of the River was held at Lake Barrington on Saturday 14 April with Tasmania putting on one of the most stunning autumn days. The Hutchins School Boat Club performed strongly across all age groups to take out both the Junior and Senior Aggregate shields. While competition in most events was good, the strength of our Boat Club stood out.

The day started off well with the U13 age group taking out all three divisions of the double scull. They also won Division 1 and placed 1st, 2nd and 3rd in Division 2 of both the single scull and quad scull events.

The U14 age group won both divisions of the double scull and Division 1 of the single scull, but faced stiff competition from St Virgil's College and Launceston Church Grammar School in the quad scull.

The U15s won Divisions 1 and 2 of the quad sculls, but were just edged out by Grammar in the doubles.

Our U16 age group continued their head-to-head contest with St Virgil's, edged out of the quad scull by 0.31 of a second, but emphatically winning Divisions 1 and 2 of the fours, culminating with a strong 9.07 second win over St Virgil's in the U16 VIII with The Friends' School placing third.

The day was capped off with the 1st VIII winning a great race in the Head of the River Boys' Open Eight. Friends got out to a strong start, but we had rowed them down by the 1000m mark and held off a fast finishing Scotch Oakburn College to win by 1.56 seconds.

The final results of the shields were:

At the Schools Championship Regatta held on 21-22 April, the Boat Club confirmed the depth of talent and commitment from U13 through to Open rowers. Our youngest rowers are a large and strong group, finishing first and second in the quad sculls, to retain the G A Pattinson Cup. Hutchins also won the U15, U16 and Open events with our senior rowers retaining the Jack Jeffries Shield.

The depth of our U16 squad was shown by five of the eight finalists in the double sculls being Hutchins rowers, and while not being able to pip St Virgil's Colege, we rowed 2, 3, 4, 6 and 7. The tables were turned in the quad sculls, beating St Virgil's for the first time this season. This age group continued their great season in eights, with the U16 1st VIII winning that event, and the 2nd VIII rowing third.

Our U14s took out their double scull event and we also took out the HEC Shield for U13 single sculls.

In the Junior Aggregate Trophy, Hutchins won with 64 points, with Launceston Church Grammar School second on 29, followed by St Virgil's on 26.

In the Overall Aggregate, for the Mercury Trophy, Hutchins had 77 points, to Grammar's 46 and Scotch Oakburn College's 29.