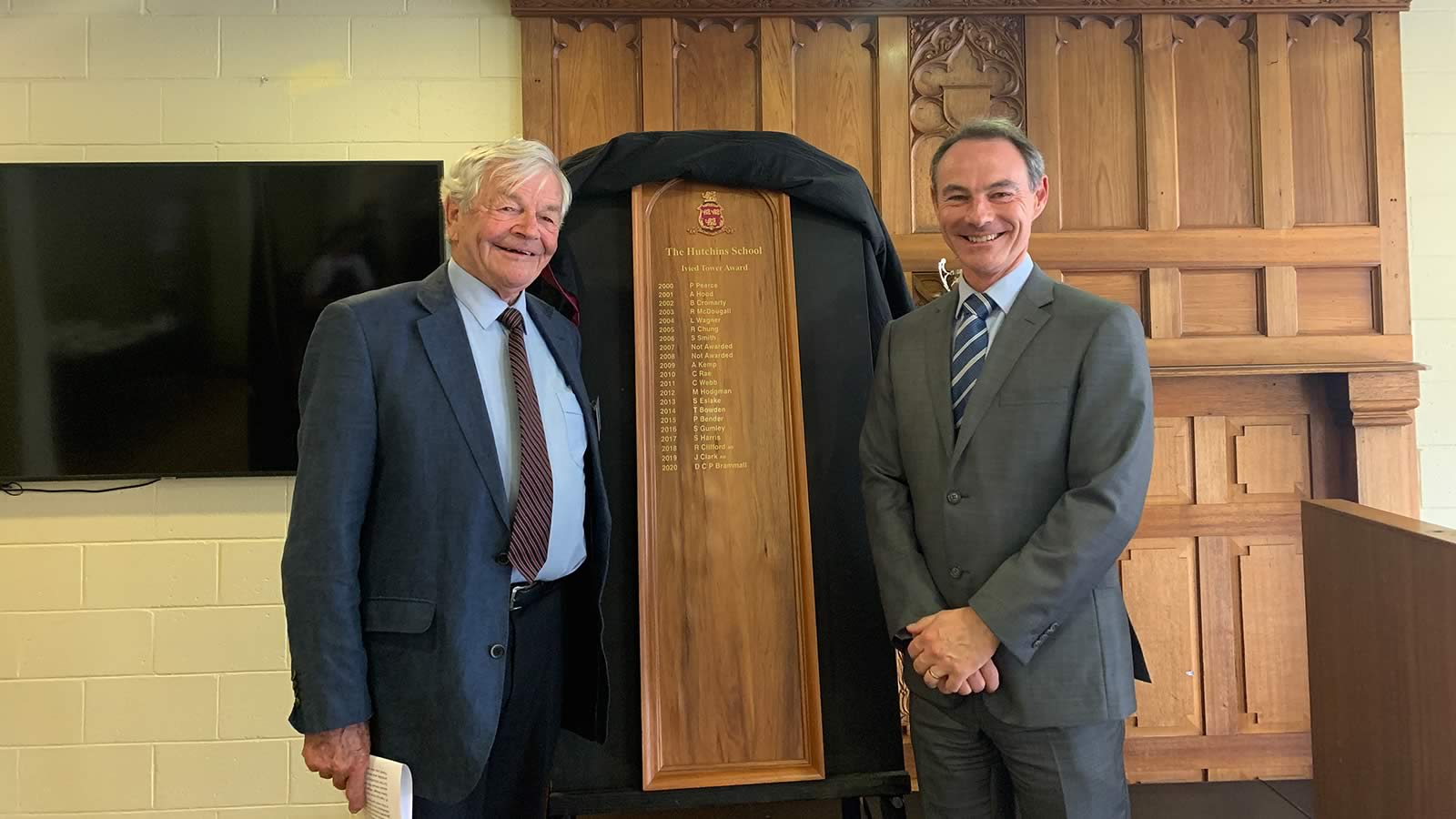 The Ray Vincent Lunch was held in Burbury House on Friday 15 November 2019 where we welcomed 70 Old Boys and special guests. The lunch is named in honour of Raymond William Vincent who commenced his journey at Hutchins in 1923 when he was first enrolled as a student. It was a journey which spanned not only the 90 years of his life but lives on as we walk through the Ray Vincent Wing of the School. As we recognise his instrumental role in early years of the Foundation’s establishment, and as we marvel at his 62 years of service to the HSOBA. It is these things which are testimony to the contribution to our great school which Ray loved and served.

At the lunch, the Hutchins School Old Boys’ Association present the Ivied Tower Award, which is presented to an Old Boy that has made an outstanding achievement in their chosen field of endeavour.

This year we were delighted to present the Ivied Tower Award to Mr David Brammall (’56) who attended the lunch with his son Robbie (’93).

David has provided enormous service to the Hutchins School and the wider community for a long period of time. David commenced as a student at Hutchins in 1945 and was School Captain in 1955 and 1956. He was a resident Boarding House Tutor in 1958 and 1959 before moving off to Melbourne in 1960. He was a Foundation member of the Peninsula School in 1961 and held several senior positions including Foundation Boarding Housemaster, Head of History Faculty, Head of Discipline and Assistant to Headmaster and Sports master.

David coached the 1st XI for 17 years, was Master in Charge for 22 years and was very involved in hockey, athletics, football and debating. He was also the Hutchins representative for SATIS for 15 years. David has served on a multitude of committees at Hutchins, the latest being the newly instituted Over 80s Club.

Service has always been one of David’s strong suits. He was a member and President of Kingston Rotary, Vice Chairperson of the Hutchins Capital Appeal in 1990, the Independent School Representative on the Tasmanian Schools Registration Board for five years, the Hutchins representative on the Christ College Trust Board for seven years and is a very active member of the Hobart Men’s Probus Club including holding the position of Chairman.

David still reads at St David’s Cathedral after 40 years and is actively involved at the School by providing assistance to our Archivist/Historian Ms Margaret Mason-Cox.

David is a true gentleman and an incredible contributor to the Hutchins and Hobart communities. We congratulate him on being this years’ recipient of the Ivied Tower Award.