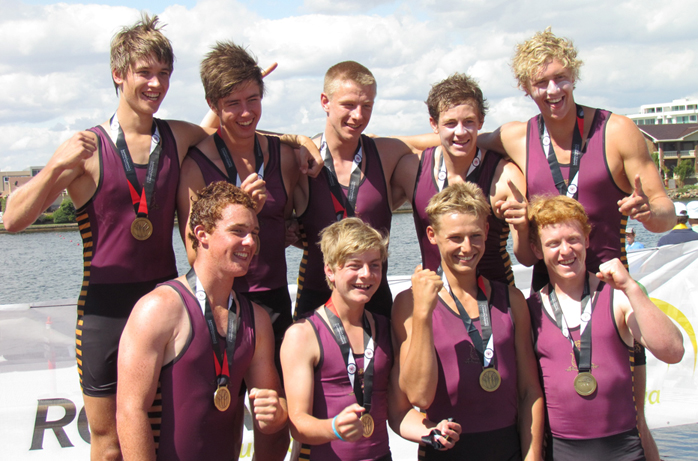 Hutchins rowers have taken out three gold medals, a silver and a bronze at the National Rowing Championships in Adelaide over the weekend, with the school retaining its position as the most successful rowing school in the nation. The next best medal tally was Scotch College Victoria with one gold and three silvers.

The First Eight Crew beat a strong field to take out the Under 19 Men’s Eight for the second consecutive year, with a sub six-minute time of 5:51.10. The crew of Toby Pitt, Wilson Mure, Will Fergusson, Sam Heron, Sam Hunnibell, Tobias Tenbensel, Frank Burridge, Marten Backmann (stroke) and Nick Edwards (cox) is coached by John Driessen.

It was the second gold medal for the day for Sam Heron who also won the Under 19 men’s single scull. Fellow First Eight crew member Tobias Tenbensel took out bronze in the same event.

The First Eight also won a silver medal in the Schoolboy Eight. In a tight finish, Hutchins won the medal in a time of 5:53.29, 0.84 seconds in front of The Scots College. The event was won by The Shore School.

In the Men’s Under 19 Coxed Four event, Dylan Rownbottom, Nathan Brown, Seb Lopa, Thomas Johnston (stroke) and Tom Downie (cox) rowed a strong fourth, to just miss out on a medal. These boys are coached by Mike Hunnibell.

All are now looking forward to the final schools regattas – with North-West Schools on 26–27 Mach, the Head of the River on 9 April and the All-Schools Championships Regatta completing the season on 16–17 April.