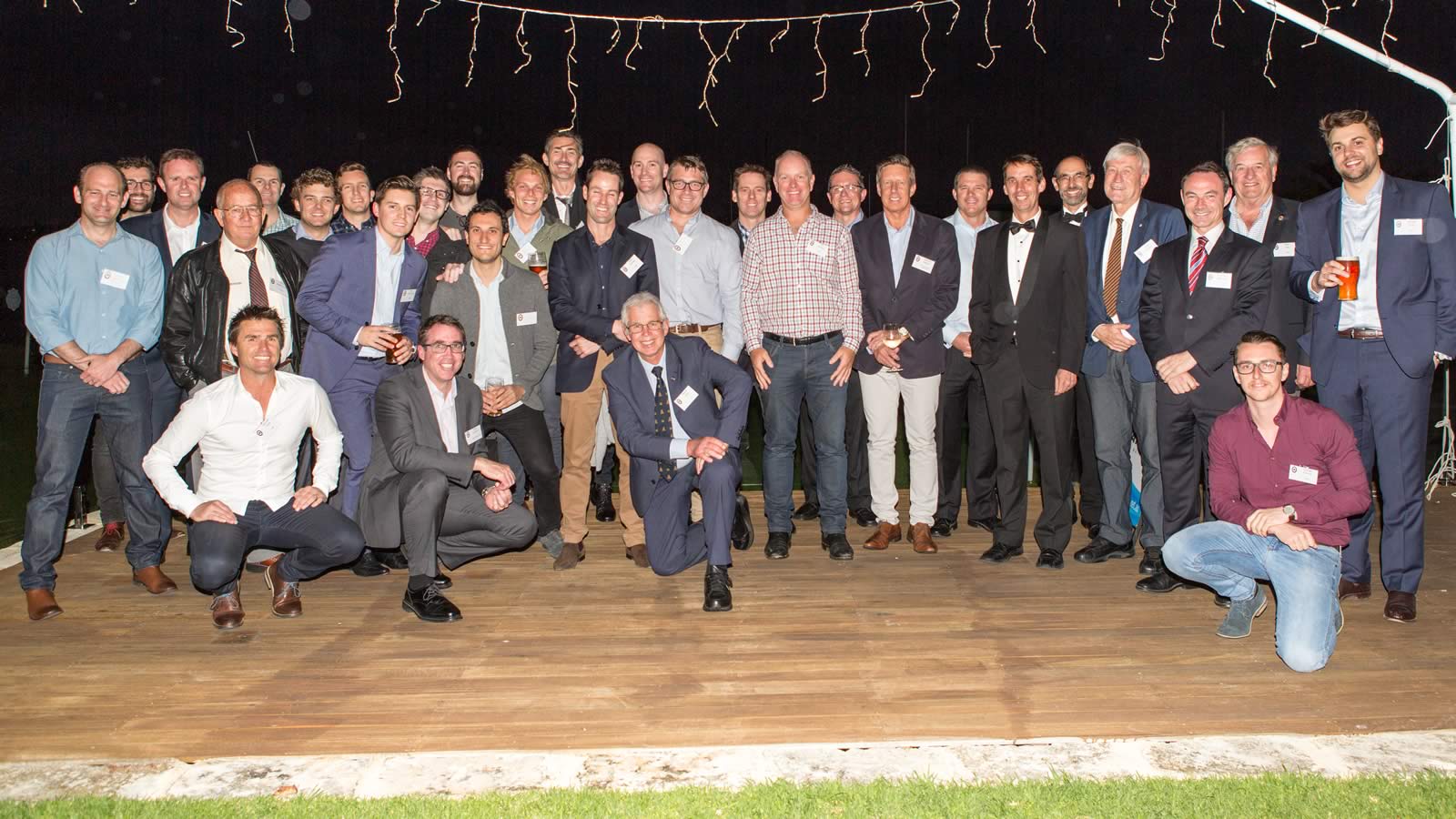 The HSOBA Perth Reunion, hosted by Barrie Irons, was held on Friday 14 October 2016.

The Claremont Sailing Club was a wonderful venue for a long overdue reunion in Perth. We had an excellent turnout of 35 to share a few stories, make new friends and to meet our new Headmaster, Dr Robert McEwan. He takes up his post as 19th Headmaster in January 2017. It was good to have Dr Adam Forsyth, Deputy Headmaster, and Mr Jason Reeves, Chief Operating Officer present. Other special guests included past staff members Alan Jones, Duncan Warlters and Cameron Herbert.

One of the highlights of the evening was the reminiscing of Tony Stephenson who left Hutchins in 1957. His final sentence was “I am an ex Hutchins boy and proud of it, that, makes me, one of you.” He is still providing wonderful service to his community and we are proud of that. We have included an extract of his speech below:

“I have been looking forward to the opportunity to stand here in front of you all and to reminisce about my time at Hutchins. But I need to introduce myself first. I started at Hutchins in 1955 by way of Glenorchy State School and after a year at Robert Cosgrove Modern School. The very efficient secretary in the archive department at school tells me that my enrolment number is 4482 and that I left Hutchins in 1958 and so I was as early part of the Post War Baby Boom. I need to say right at the start that I was one of that large group of anonymous students that made up numbers.

As with any speech these days, the first thing that I did, when there was a possibility, that I may be able to wear the yellow jacket, was to seek information from Dr Google, who told me that Hutchins, during the period that I, and later my brother, were there was in a building phase under the guidance of the Headmaster at the time William Mason-Cox.

My earliest memory at Hutchins was from day one. As a very new boy in my first grey suit with short trousers, travelling on my own, on the train and bus, from Montrose. I remember being by the Bell Tower in Macquarie Street, waiting to go into the hall for my first assembly and hearing Hull and Hodgman talking in a loud voice about coming through Melbourne Airport. I don’t know, that I was impressed in how worldly they were, but never the less, that particular memory lingers still.

On that one day, at the conclusion of what was for some the return to school service, with the hymn "Lord receive us with thy blessing" still ringing in our ears, names were called out and off to class all the new boys went. I did not hear my name and so was left sitting there, a lost new boy on day one. My further memory of that day is being asked "what did I want to be called Anthony or Tony" and settled for Tony. I think Tony Salisbury was in the same class and he was a regular associate during and after Hutchins. If my memory is correct we were in a room that looked out onto the playing area, a room that even then I thought was pretty rough but the influx of new students must have stretched the accommodation, which meant that classroom space was at a premium.

I don’t remember much about my first year contemporaries, but looking through the photos in school magazines archives, brings back faces of people I have not thought about in many years. I do however remember doing a Saturday morning detention one weekend and walking past John Gay who was sitting on the benches outside our classroom, telling anyone who would listen in a loud voice that his father had a Mark 2 Jaguar, which then was very special. I had more to do with John when I moved to Deloraine with the Hobart Savings Bank and we were both in Apex there.

The Jaguar leads me into another area, I remember very fondly being able to go to the library and read the English car magazines that were there. To this day I have a monthly subscription to two titles that owe my patronage to the time I spent at Hutchins Library and to the librarian Doug Blain, who went on to be a journalist with the types of magazines that I buy today. I wonder where Doug Blain is now.

Those of you who have memory of the Macquarie Street era, will remember the back of the property. Close your eyes and walk with me down the passage from the Bell Tower, the surface is asphalt, we pass the Art room on our right. I don’t remember who the teacher was only that he came from Claremont and that I spent art classes trying to draw Rolls Royces, but could never get the line quite right. Moving on, on our left we come to what had been a locker room but where I spent a year with Mr Binni and another new Australian gentleman who was trying to teach us French, in looking back he must have hated coming to work, we were a rowdy unsympathetic bunch who despite his efforts learnt nothing. On our walk we have reached the area overlooking the playing area, there were cricket nets to the right and grassed area in the middle where we kicked footballs end to end and tennis courts on far left. Around the right hand corner was another classroom, the tuck shop and the Fives court, at one point I thought I was pretty good at Fives, a game much like squash and I played it a lot during breaks.

My memory of the tuck shop is of Mason-Cox sitting there one lunch time. I had won the open 400 yard swimming at the House sports and had come second at the combined swimming sports to Peter O’Loughlin from St Virgil’s who went on to become a priest. Mason-Cox was sitting just inside the door positioned so that each boy looked at him as he entered, he congratulated me on the swim, but I was so nervous at seeing him that I mumbled a reply and fled.

My last year at Hutchins was sitting in the near class room, next to Bob Clifford. Because of the association at Hutchins I sailed with Bean in his D Class yacht “Elfin” and was the groomsman at his first wedding, I should perhaps have maintained a closer contact with Bob and may have been able to enjoy the good years with the Catamaran Company.

Dr Google and the end of year magazines and photos have given me some more memories, the Hutchins B grade hockey team, premiers of 1957, the inter school swimming team premiers, also of 1957, the combined Cadet Officers and NCO and teachers. I see there is Crom Wood in Army uniform, Don Proctor in Airforce uniform, John Kerr looking bemused in a Naval uniform and Robin Grey. I have often wondered what happened to Robin Grey. My memory is that he may have married the matron and I think he moved over here but I’m not certain. He had an office in the double storey boarders block and wanted me to go to him for counselling, I ducked and dived and did not go, perhaps on reflection I should have gone.

The annual magazines I have been able to read, do not mention the outside charity work that we did each year, and yet it is one of the activates, that sticks out in my memory. I particularly remember painting the fence at Glen View Nursing Home at Glenorchy, and working at a property at South Hobart. There was a long hill and I rode a bike down it and fell off. Charity work, through Apex and Lions have been a big part of my life, I think that Hutchins in a small was responsible for ingraining in me the worth of participating in community service.

Well my time is up, there is more I would have liked to have explored. I have found thinking about a period almost 60 years ago to have been therapeutic. The combined form Vs of 1957 amounted to 57 boys, some did not live 5 years after Hutchins, before passing and the years since have seen others drop away. Some, purposely dropped out of sight after school for one reason or another, some like me just keep working away.

There is no point in comparing Hutchins then and now, we did not have anywhere near the facilities that the school and students enjoy now but we did however have the same enthusiasm for the badge and the ethos of the founding fathers. I look back with regret for lost opportunities and nostalgia at the friendships formed and mostly not maintained. My parents made sacrifices to send my brother and I to Hutchins and I am eternally grateful to them.

John Kennedy in his inauguration oration said something to the effect “ask not what your country can do for you – ask what you can do for your country”. I have not asked “What did Hutchins do for me”, and in truth I have not done much for Hutchins. I would wish that I could have done more, Hutchins did have an effect on me, not academically but in a more subtle way and I am better for it.

I am an ex Hutchins boy and proud of it, that makes me one of you. Thank you all for listening.”