Archives moment: a set of playing cards and a pin provide links to Tasmanian history 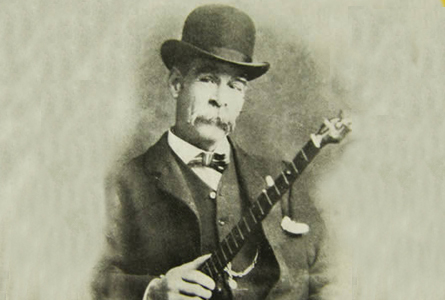 Archivist Margaret Mason-Cox explains how Hutchins is connected  to a noted Tasmanian artisan.

A phone call from a past parent and Tasmanian history researcher led this week to the discovery of some interesting links with Hutchins history. The mother of two recent Old Boys contacted the School regarding research she is conducting on the life of Thomas Midwood (1864, no. 640), noted Tasmanian artist, cartoonist, woodcarver, calligrapher, designer and musician, whose work was featured in an exhibition at the University of Tasmania in 2008.

Thomas Midwood’s grandparents arrived in Van Dieman’s Land  in 1822 and his grandfather became proprietor of the Sorell Distillery at Cascades. When he died in 1823, Midwood’s grandmother opened a school for girls to enable her to raise her six children. His father worked at the Hobart Police Office and Midwood himself worked as a draughtsman with the Public Works Office, designing the ‘Welcome to Apple Land’ processional arch for the visit of the Duke and Duchess of York in 1901, as well as exhibition trophies made of Tasmanian timbers. Our contact, who prefers to remain anonymous, inherited a set of Midwood illustrated playing cards through her family connection to Midwood’s old school friend, David Barclay.

David Barclay (1897, no. 1522) was the third son of David Barclay (1855, no. 313), himself the fourth son of another David Barclay, whose seven sons and grandsons all attended Hutchins. The third David Barclay was killed during the Great War in 1916. Discovered coincidentally in the Hutchins Archives and Heritage Collection is a gold stick pin featuring the Hutchins crest, inscribed on the back ‘H. S. Cadets / Efficiency / D. Barclay / 1902’.