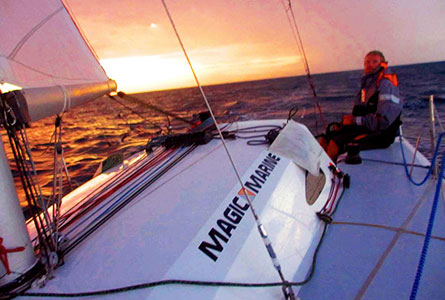 Since his completion and record breaking win of the Clipper Round the World Yacht Race, Old Boy Richard Hewson (’97) remained in Europe to concentrate on his next campaigns preparing for the 2013 Mini Transat Race and the 2014 Global Ocean Race.

Richard is preparing to race in the Mini Transat which is considered to be one of the most extreme single handed events in the world due to the race length and the boat’s small size. Every two years the 4000nm trans-Atlantic race starts from Brittany to Guadeloupe via the Canary Islands.

The Mini Transat starts in September 2013 and is an extremely demanding race and a true test for a sailors ability to not only sail the boat to the best of its ability but also manage sleep deprivation in a variety of extreme conditions. The Mini Transat starts on the east coast of France in Douarnenez, stopping briefly in the Canary Islands before continuing westward to the Caribbean nation of Guadeloupe finishing in Pointe-a-Pitre.

The Mini Transat race is a breeding ground for the best single handed sailors in the world including Michel Desjoyeaux, Ellen MacArthur and the majority of the skippers in this year’s Vendee Globe Yacht Race. The Mini Transat is a demanding race and a true test for the best sailors as the route covers difficult and adverse weather conditions while racing in a 6.5m yacht.

While in Europe was sponsored by Magic Marine and Katablatic sailing to race in two Mini Transat qualifiers in Valencia and Barcelona around the Mediterranean Islands. Richard was proud of his results, coming in the top end of world class fleet while sailing a newly produced series boat that was untested against the other designs.

Richard returned to Australia at the end of October and has been speaking about his record breaking wins to companies and yacht clubs, and is seeking sponsorship to continue his campaign to win the 2013 Mini Transat. While not sailing, Richard is now residing back in Tasmania and working at sea in Bass Straight and around driving Anchor handlers and rig tenders for Farstad shipping. Richard will be speaking about his adventures at the RYCT at the end of November and hopes to see as many Old Boys there as possible.  Further information on Richard Hewson's campaign and presentations around Australia can be obtained from www.hewsonracing.com or by emailing Richard at hewsonracing@gmail.com.