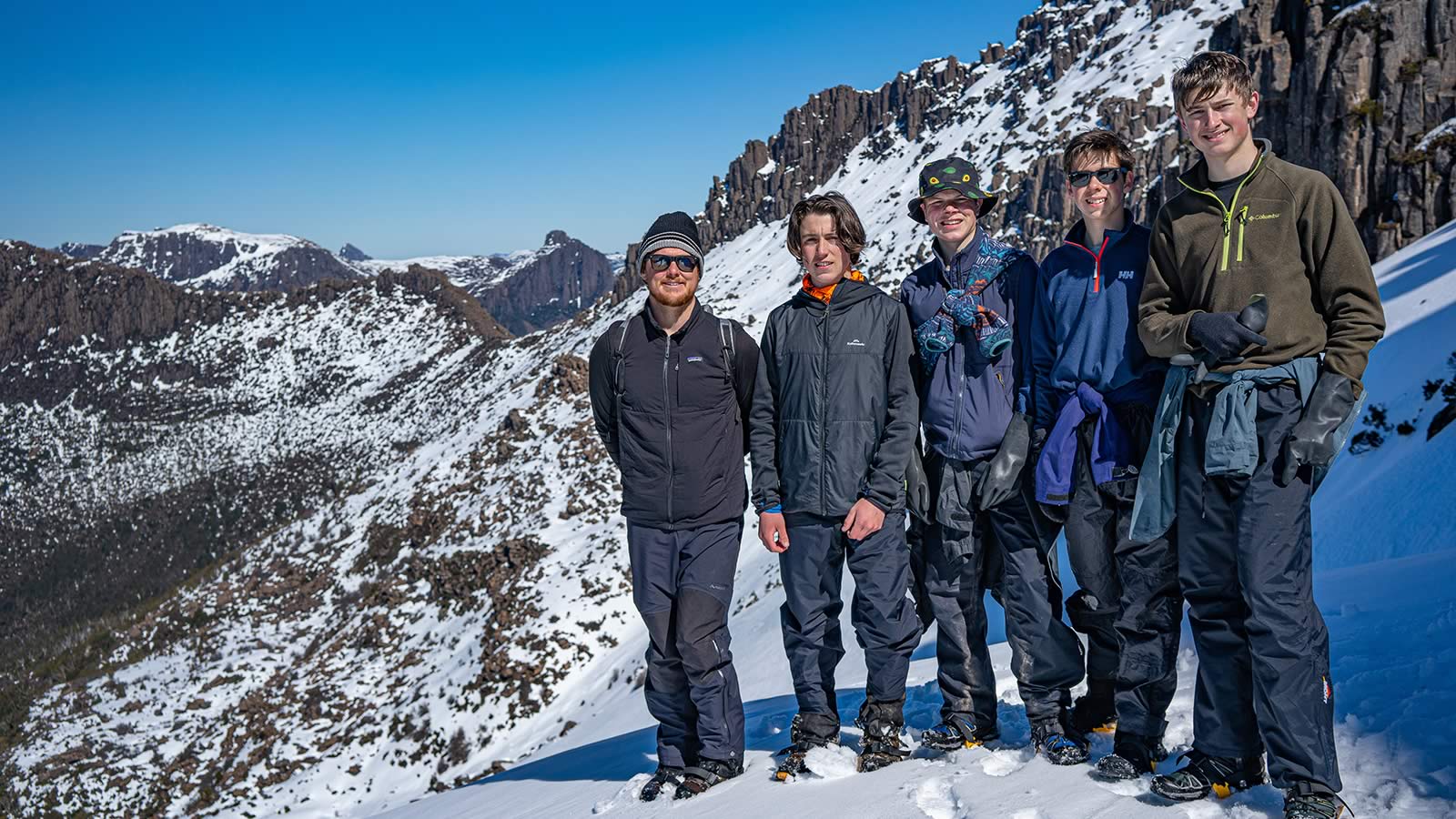 On Sunday 15 September, 11 students disembarked from Hutchins in the early hours of the morning to the trail head of the famous Overland Track. Mr Mark Oates and Mr Daniel Blake’s class headed to the traditional starting point of Dove Lake where they would journey south for six days to Cynthia Bay at the southern end of Lake St Clair, marking the end of their journey. For Mr John Braid and Mr Robbie Tuck’s class, they headed to the southern end to complete the journey in the opposite direction, which is only possible in the winter months, so is seldom done. By splitting the group, we were able to decrease group sizes, which allowed for greater flexibility for the boys to create their own trip and have the potential to see more of the pristine World Heritage Area whilst meeting back together on the third night at New Pelion Hut to share their stories.

The group traversing the park in a southerly direction received a nice dusting of fresh snow on their first night after a short, but technical climb over Hanson’s Peak and then down to Lake Rodway to stay at the Scott-Kilvert Memorial Hut on the eastern flank of Cradle Mountain. This fresh layer of snow transformed the World Heritage Area in to alpine wonderland that was more reminiscent of Northern America, Europe, or Canada rather than Australia. The group goal quickly transformed from just completing the six day walk to attempting the summit of Tasmania’s highest peak, Mount Ossa which would provide magnificent views of most of the National Park. After meeting the northward travelling group at New Pelion Hut and hearing of their day climbing Mount Pelion East, they planned their ascent of Mount Ossa. Due to thick ice on the section, the boys were unable to summit Mount Ossa the next day but the group were able to practice some valuable techniques to safely traverse alpine environments in winter. The last two days were challenging due to the fatigue of the group and longer distances, however the group were provided with ideal walking conditions to finish off their Overland Expedition.

The group traversing the park from south to north shared a unique experience, starting their journey through the myrtle forested shores of Lake St Clair. Their overall goal was to climb a peak with great 360 degree views of the World Heritage park and to share some meals in these amazing locations. The northward travelling group completed both of their goals with the expert guidance of Mr Braid and Mr Tuck, who between them have undertaken over 100 Overland Expeditions, this included summiting Mount Pelion East with amazing views looking west over the Overland Track and looking east over the Walls of Jerusalem National Park, later setting up on Lake Windermere for a scenic dinner spot watching the sun set. The group finished their work travelling east around Cradle Mountain, staying at Scott-Kilvert Memorial Hut for their final night and departing via Hanson's Peak with amazing views of Dove Lake below to finish of their epic journey.

All boys who completed the Overland Expedition thoroughly enjoyed the experience, spurring all to pursue further adventures in Tasmania’s pristine wilderness, some even vowing to come back and show their family and friends the splendour of this Tasmanian World Heritage area.

The full album of photos from the Overland Track can be viewed on our Facebook page.