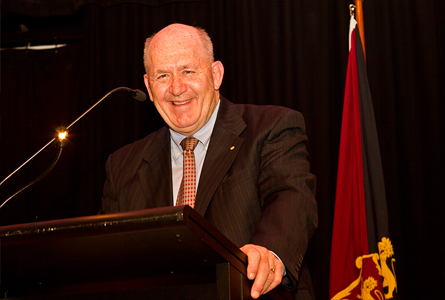 An annual highlight of the School’s calendar, The Webber Lecture – named in honour of The Reverend Michael Webber, formerly Dean of Hobart – is a free public address on an ethics topic. State Governors, Professors, Authors and Supreme Court Judges are among those who have presented.

Presenting to an audience of hundreds at the Terence Butler Auditorium, Peter Cosgrove spoke on the topic “Ocker Ethics – Lofty Rhetoric or Grassroots Values?”

As well as exploring the ideological struggles which formed the global political backdrop for a young democracy, Peter gave fresh and thought-provoking insight into some of the major events in Australia’s history which have helped shape our own sense of “ocker ethics” – from the Whitlam years to the Mabo decision and the Republican debate.

The audience of VIPs, members of the Hutchins community and wider community were engaged and delighted, with many enjoying the chance to take part in a Q&A session following the lecture with our special guest.