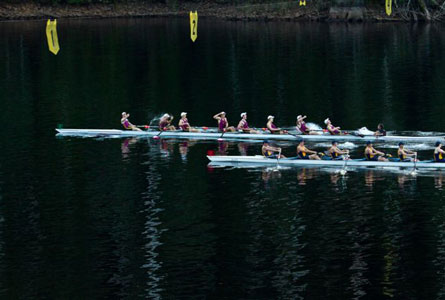 Again in 2012 The Hutchins School Boat Club has excelled, with the successes including: three podium finishes at the Australian Rowing Championships, winning the Rowing Tasmania Schools Pennant for the third successive year, nine trophies at the Tasmanian State Championships, retention of the Junior and Senior trophies for both the All-Schools Championship Regatta and Head of the River Regatta and for the fifth successive year, winning the Head of the River Schoolboys Eight.

Participation has been strong, with more than 100 boys rowing, sustaining the great depth of recent years, with an excellent senior leadership group led by Captain of Boats, William Fergusson. Old Boy Phil Hutton took on the role of Senior Coach this year working with Strength and Conditioning Coach Ron Nylander. The strong volunteers support in coaching and by the Supporters of Hutchins Rowing has been fantastic.

Twenty rowers represented the School at the National Rowing Championships from 5-10 March at Champion Lakes in WA. In trying conditions with temperatures consistently in the high thirties, our rowers came away with some fantastic results and great experiences.

Representing the Opens Boys, Sam Heron claimed a Silver medal in the U19 Single Scull, with William Fergusson and Richard Giblin teaming up to take another Silver in the U19 Double Scull. The First VIII consisting of (from Bow), Tom Howard, Huw Green, Richard Bannon, Thomas Johnston, Richard Giblin, Sam Heron, William Fergusson, Max Heerey and Tom Downie (coxswain) also put in a great performance to win Bronze in the Men’s U19 Eight. From the U17 age group boys competed in the Eight, the Quad Scull, the Double Scull, the Single Scull and the Schoolboy Single. The VIII came fourth in a tight race, with Jock Stalker and Edward Jeanneret making the semi-final in the Double Scull and Jock Mure put together a great row in tough conditions to come third in the B Final of the Single Scull.

Participation in the Rowing Tasmania Pennant Regatta series is an integral part of the Senior program. Boys completing Term 3 of the Power of 9 program and Senior School rowers compete in the pennant series in which, for the third successive year, Hutchins won the Schools Pennant. This was presented to the School by His Excellency, the Honourable Peter Underwood, Governor of Tasmania at the Rowing Tasmania Centenary Dinner in April this year. 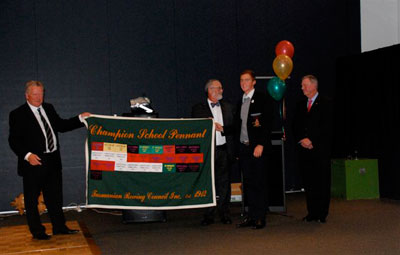 At the State Championship Regatta Hutchins won the U17 Quad and Four, the U19 Single, Pair, Double, Coxed Four, Coxed Quad, and Eight and the U23 Eight. For the third successive year, Sam Heron won the Peter Keyes Trophy for the most impressive Tasmanian junior rower. 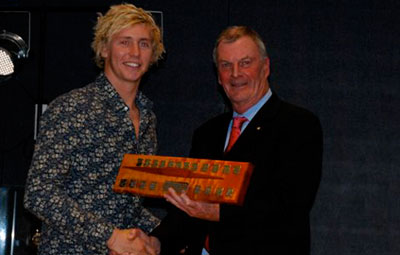 The School Regatta season commenced with a new Northern Junior Sculling Regatta held late in Term 3 of 2010. Sponsored by the Tasmanian Schools Rowing Association (TSRA) and held on the Tamar, this was a great opportunity for U13, U14 and U15 rowers to have competition early in the training season. The Southern Schools Regatta in February at Franklin was held under extreme temperatures with only a handful of events before the temperature rose above 35 degrees and the remainder of the competition was cancelled. However, early in the morning the Hutchins 1st VIII won the Southern Head of the River by four seconds from The Friends' School. It was a similar story on Sunday at the Southern Junior Sculling Regatta, with races being called off before lunch. At the North West Schools Regatta the Boat Club competed well across all age groups retaining the Junior and Senior Aggregate Shields. There was a heart-stopper in the Open Schoolboys Eight with less than one second between Hutchins 1st, Scotch Oakburn College 2nd and Launceston Church Grammar School 3rd. The result was clearer in the U16 Eights, with our 1st VIII 13 seconds clear of St Virgil's College, and our 2nd VIII third ahead of The Friends' School.

The SATIS Head of the River was held at Lake Barrington on Saturday 14 April with Tasmania putting on one of the most stunning autumn days. Again, The Hutchins School Boat Club performed strongly across all age groups to take out both the Junior and Senior Aggregate shields. The day started off well with the U13 age group taking out all three divisions of the Double Scull. They also won Division 1 and placed 1st, 2nd and 3rd in Division 2 of both the Single Scull and Quad Scull events. The U14 age group won both divisions of the double scull and Division 1 of the single scull, but faced stiff competition from St Virgil's College and Launceston Church Grammar School in the quad scull. The U15s won Divisions 1 and 2 of the Quad Sculls, but were just edged out by Launceston Church Grammar School in the doubles.

Our U16 age group continued their head-to-head contest with St Virgil's College, edged out of the Quad Scull by 0.31 of a second, but emphatically winning Divisions 1 and 2 of the fours, culminating with a strong 9.07 second win over St Virgil's College in the U16 VIII with The Friends' School placing third ahead of our 2nd VIII. The day was capped off with the 1st VIII winning a great race in the Head of the River Boys Open Eight. The Friends' School had a strong start, but we had passed them by the 1000m mark and held off a fast-finishing Scotch Oakburn College to win by 1.56 seconds. 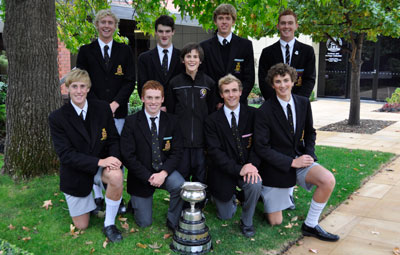 The final regatta, capping off the season was the Schools Championship Regatta held on 21-22 April. The Boat Club confirmed the depth of talent and commitment from U13 through to Open rowers.  Our youngest rowers are a large and strong group, finishing first and second in the Quad Sculls, to retain the G A Pattinson Cup. Hutchins also won the U15, U16 and Open events with our Senior rowers retaining the Jack Jeffries Shield. The depth of our U16 squad was shown by five of the eight finalists in the Double Sculls being Hutchins rowers and while not being able to pip St Virgil's College, we rowed 2nd, 3rd, 4th, 6th and 7th. The tables were turned in the Quad Sculls, beating St Virgil's College for the first time this season. This age group continued their great season in eights, with the U16 1st VIII winning that event, and the 2nd VIII rowing 3rd. Our U14s took out their double scull event and we also took out the HEC Shield for U13 single sculls.

Recently, Richard Giblin has been selected as the only Tasmanian to participate in Rowing Australia's Talent Identification/Development Team which will be travelling to New Zealand in June. Richard received this opportunity after competing at the Rowing Australia Time Trials in Sydney in April. We are also very proud that Old Boy, Tom Gibson has been selected to compete at the 2012 Olympic Games.