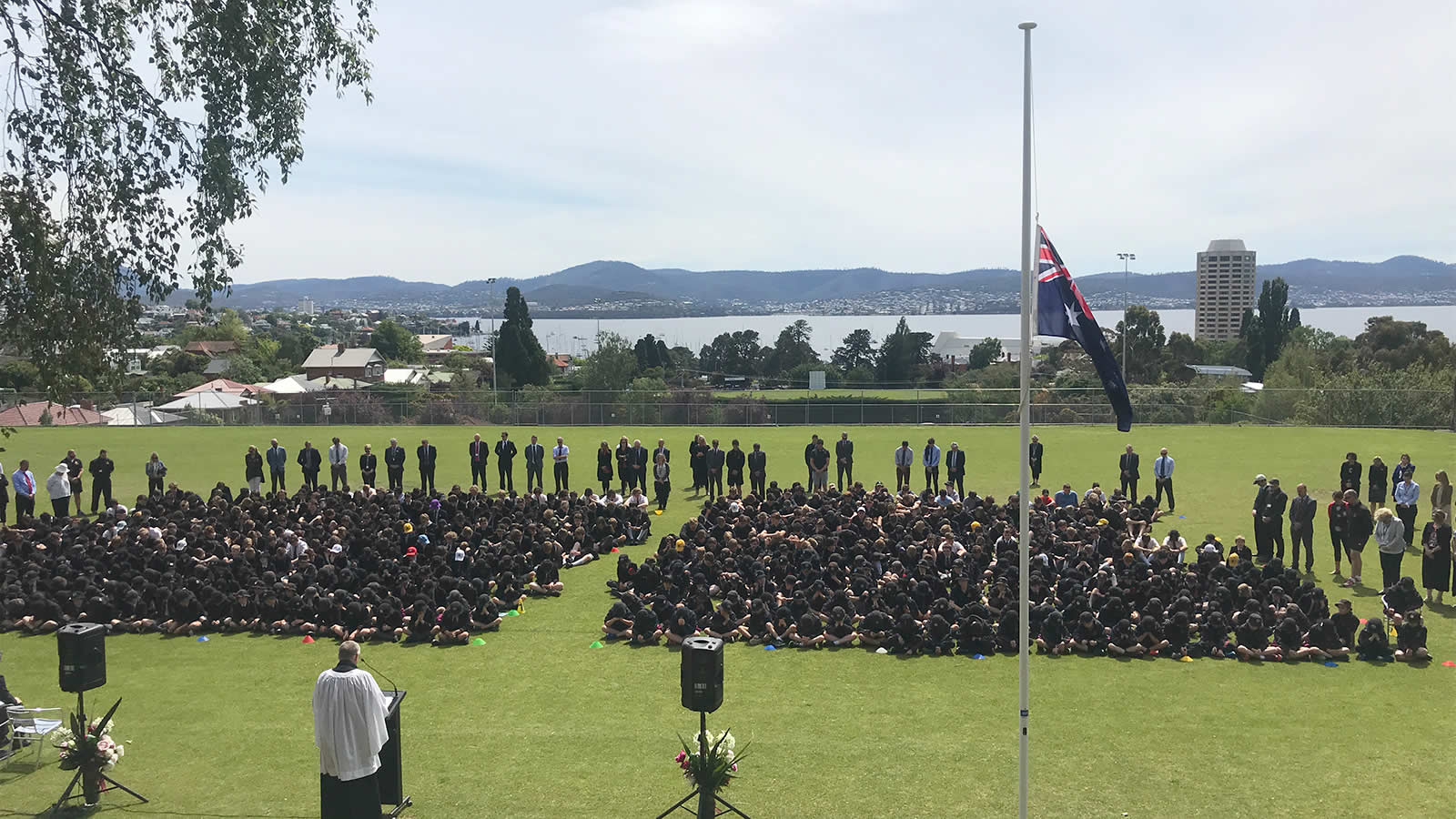 Yesterday students from Years 3 to 10 gathered in honour of Remembrance Day. Students reflected on the sacrifices made by those who fought for our freedom and paid their respects to The Hutchins School Old Boys who gave their lives in World War I.

The following speech was read by Headmaster Dr Rob McEwan:

One hundred years ago to this very day and at this very time, 11.00am on the 12th of November, 1918, the then Premier of Tasmania, Walter Lee stood outside the Hobart Town Hall before a massive crowd to tell all those gathered that the guns have finally fallen silent in the terrible war that was World War I. The previous day on the 11th of November an armistice treaty had been signed that saw the fighting finally stop. This day was to hold special significance in the years to follow the war, now known as Remembrance Day, the country stops on the 11th hour of the 11th day of the 11th month every year to remember the sacrifices made by those who fought for our freedom.

I know it is hard, perhaps impossible for us to imagine the relief, joy and for many sadness that those gathered at the Hobart Town Hall, 100 years ago would have been feeling. Most homes don’t have faded photographs of men and women in uniform on our mantelpieces anymore, as many of our grandparents and great grandparents did. We don’t know of any family members who fought on the muddy fields and in the trenches on the Western Front.

While it may be difficult to imagine this time 100 years ago, know that every one of us has benefited from what they did. This wonderful country, our freedom, this school, those who have come before us have influenced it all. The very qualities that we value and the freedom we enjoy today stem directly from the events of the past.

Just as the sound of warfare, and the fear and destruction that reigned over Europe for over four years was replaced with silence on the 11th of November, 1918 we too will fall silent immediately following the playing of the Last Post. This silence is a time to remember them, to honour their sacrifice and be thankful for the freedom they fought so hard to protect and that they have given to us. This freedom was their dream and for 62,000 of them, it was a dream they never saw. They never made it back home. We are living their dream. We are the recipients of their sacrifice. We owe it to these men and women, not only in WWI but to all Australian service personnel who have fought for our country including those serving our country on this very day in conflict overseas.

At the end of the silence, Angus Christie will play the Rousse – a call to awaken. It is not a call to those who have gone before us – it is a call to us. A call to you and me to honour their sacrifice by protecting the values they fought hard to preserve. Qualities of courage, loyalty, compassion and fairness. A call for us to help others, those less fortunate than us, people we could have been. It is a call to stand up for what is right, to look after each other. This is how we honour them.

Before the playing of the Last Post, the names of Old Hutchins Boys who gave their lives in World War I will be read. Each name is a young man who once sat in the classrooms of The Hutchins School, who volunteered to defend our freedom and who left a family, friends and loved ones behind back here in Australia, each name was a young man who never returned.

When the Rousse has finished, we will return to our normal day, there will be no more speeches or instructions. Rather we will move away in silence to commemorate the day the guns fell silent 100 years ago. Be thankful for what we have, celebrate our freedom, stand up for what is right and look after each other. This is their legacy given to us.