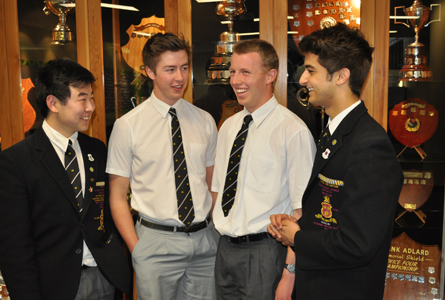 Students from The Hutchins School have again achieved outstanding results in this Year’s TCE examinations. An analysis of ATAR scores reveals:

Among our top achievers are:

The Hutchins School Headmaster Warwick Dean says he is thrilled with these results.

“I’d like to say how proud we are of the significant number of boys who have achieved such excellent results.”

“While we are very proud of the outstanding results of our students, we are equally proud of the great weight of numbers of students who have achieved very high TCE and ATAR scores.”

“Importantly, and as in previous years, we are very pleased that these results are giving boys access to the courses of their choice.”

Below is an article written following an interview with Hutchins’ top scorer Nanak Narulla and his mother Ms Sally Brown.

For most families, being able to boast that your child has completed Year 12 with a TQA score of 95 or above would be well worth a mention in an annual family Christmas email.

For Ms Sally Brown however, having a top scorer in the family is nothing unusual. Ms Brown has now seen all four of her sons graduate with scores of over 99, with her youngest son, Hutchins student  Nanak Narulla this week finding out he has followed in family tradition with an ATAR score of 99.85 out of a possible 99.95

“All four of my boys have scored well over 99, with two of my sons topping the state.”

Nanak has also helped make history for the Hutchins School – as the third of his brothers to be named Dux.

Nanak says he is excited about being able to follow in his brothers’ footsteps.

“Ideally I would like to study Medicine at the University of New South Wales. If I am accepted, I would be the fifth Narulla, to go to that University.”

As a student who this year juggled a leadership role as Deputy Head Prefect as well as co-curricular activities such as sport and debating, Nanak’s advice to the Class of 2012 is to keep the balance right.

“The culture at Hutchins of not just one that promotes, academics but also recognises character development. There is a focus on life skills and the importance of developing the confidence to take on new challenges.” he says.

Despite his family’s successes, don’t try telling Nanak his success is all down to good genes.

“I believe anyone can do well in what they choose to do if they work hard. I have spent every spare minute studying,” he says.

Mum Sally says this even extends to the swathe of 18th birthdays Nanak has attended.

“He has been known to stay up and study when staying at friends’ houses after parties,” a claim Nanak only half-heartedly denies with a cheeky smile.

And as for advice for other parents of those aiming high? Ms Brown says the motivation has to come from within, and says as a parent all you can do is provide the right environment.

“My tip as a parent is to provide a quiet room dedicated to the family member going through Year 12,” she says.

But she says her family have been lucky to have been motivated by each other.

“They call each other up and share their achievements. One of their favourite sayings is: “go team!”