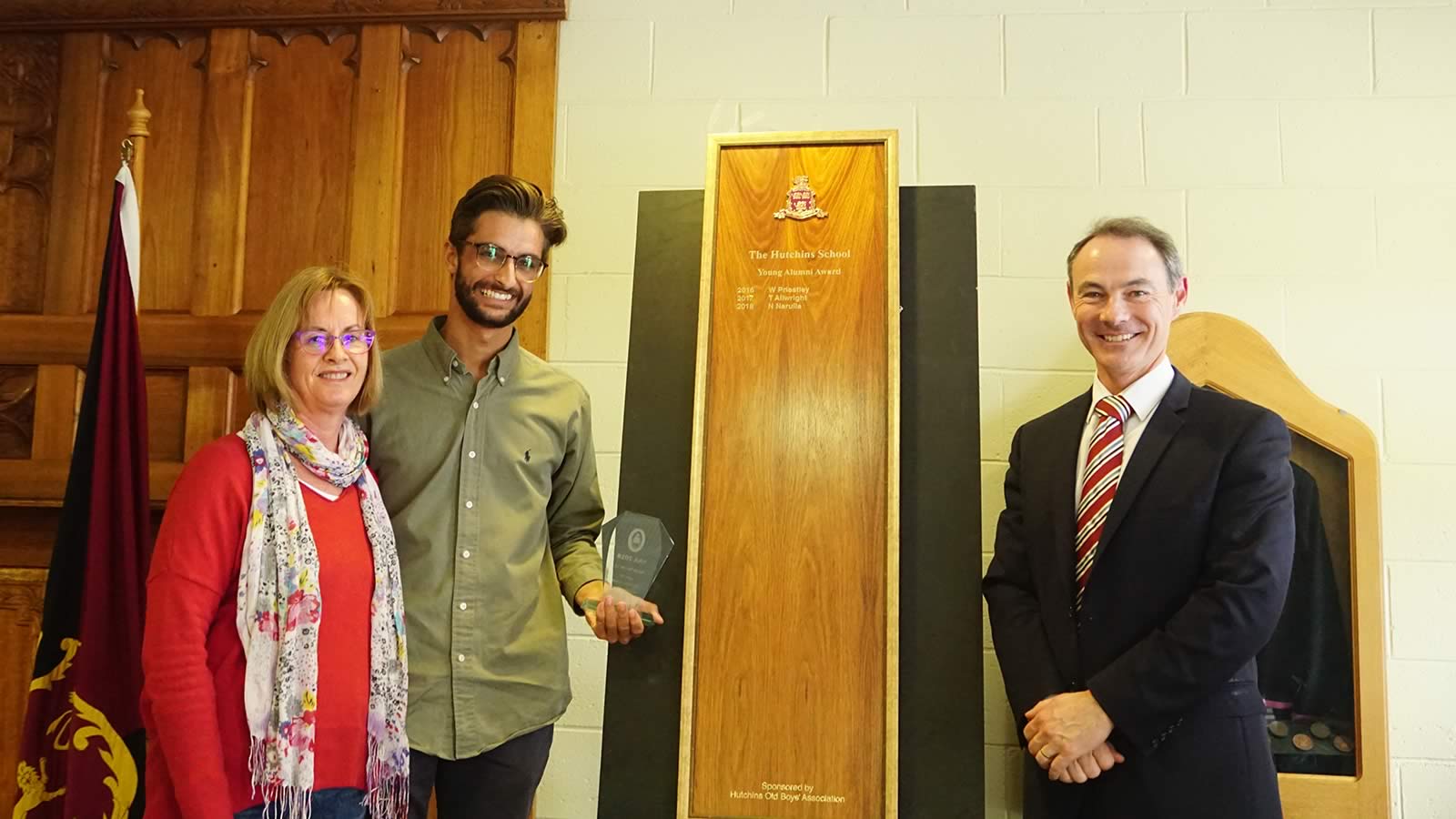 Today the 2018 Leavers Luncheon was held in Burbury House, where the Year 12 students were welcomed as Hutchins Old Boys. The boys are encouraged to stay connected no matter what their future brings and to continue to live within the values of The Hutchins School, being grateful for all of the opportunities, friendships and education that the school has and will provide.

On behalf of Mr Barrie Irons, President of the Hutchins School Old Boys’ Association (HSOBA), Mr John Groom (‘86), Director of Advancement and Alumni Engagement, presented Nanak Narulla (’11) with the 2018 HSOBA Young Alumni Award. This award recognises Hutchins Alumni in the early-mid stage of their careers who have made a significant achievement in their chosen field of endeavour. The HSOBA and leavers of 2018 have selected Nanak as the winner of this award for his work with Asylum Seeker Advocacy, Indigenous Australian Advocacy and Environmentalism all whilst completing a Law degree at UNSW which he will graduate from this year.

Nanak moved to Sydney after Hutchins to do a Medicine/Arts degree in 2012, transferring to Law in 2015. Since then Nanak has been involved in the following:

In the middle of his first year of Law he started visiting Villawood Immigration Detention facility weekly with a volunteer group to provide support to asylum seekers detained here, because he wanted to begin to enact his core ethical and political commitments by becoming actually, and impactfully involved with causes that he cared about. Over the next year and a half his involvement with asylum seeker advocacy ramped up, including co-organising a trip to Darwin with 5 other students to assist 30 asylum seekers at Wickham Point Detention Centre with their asylum applications. He also guest edited an edition of a human rights magazine called the Human Rights Defender, creating an edition called ‘Villawood’ that sought to showcase the experience of asylum seekers, volunteers, and academics involved in this area. In September 2016 he secured a job to be deployed in Manus Island, Papua New Guinea as part of the legal team that was contracted by the government to legally represent the asylum seekers in their refugee status applications. This experience shifted Nanak’s future intentions away from working as a direct advocate for clients, towards a desire to use his legal knowledge to inform and direct policy. This issue is very close to his heart and is one in which he hopes to work in the future.

As a half-Indian Sikh growing up in Hobart, Nanak was always sensitive to racism and the uglier side of Australian race-relations but it was not until his move to Sydney that Australia’s treatment of First Nations peoples became a reality. Since then Nanak has been involved in this area for the past 5 years as an academic tutor to indigenous students at UNSW, as a presenter in a documentary shot on Wiradjuri country, and in a legal capacity as an intern at Miriuwung Gajerrong Corporation in Kununurra, WA, which is a corporation/de-facto representative body that holds and administers native title for the local Nation.

Recently, Nanak took part in an 8 month leadership course through the Centre for Sustainability Leadership, which helped to introduce him to an incredible community of positive environmentalists in Sydney. The reality of a future where we will be displaced by the effects of climate change is one that we will have to confront and Nanak’s experience working on Manus demonstrated that we’re going to need to have a serious social transformation before Australia is psychologically ready to play the role it will have to in assisting that process. This nexus is the area that Nanak would like to explore.

Nanak plans to continue his studies and is currently applying for a Rhodes Scholarship at the University of Oxford.

We cannot wait to see what the future brings for Nanak and our leavers of 2018!