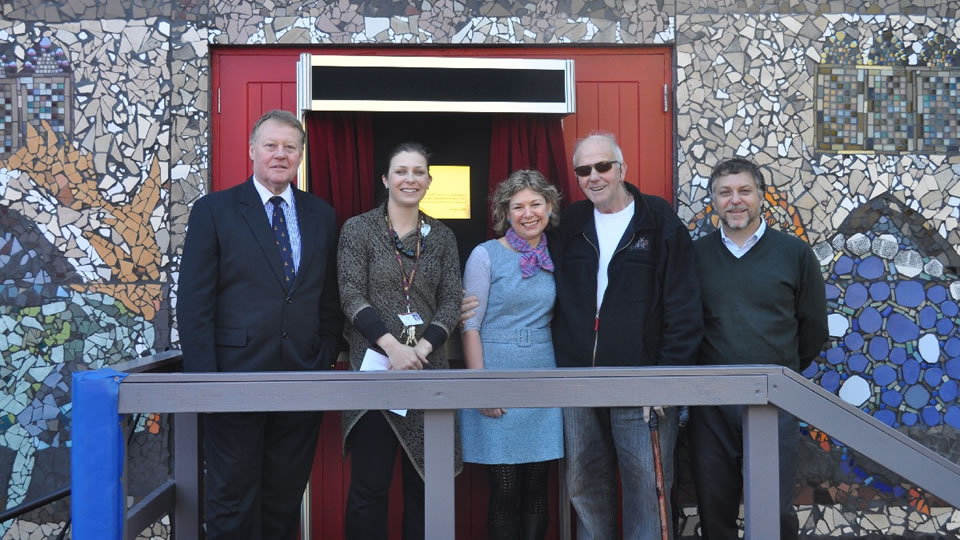 A sunny spring morning saw the official unveiling of the spectacular tile Mosaic Mural created by Junior School students from Years 3 to 6.

The stunning piece, created from donated coloured tiles has already attracted much attention since it was completed during this year's Anniversary Week.

Created to overlay a wall near the entrance to the Junior School, the mural has transformed the feel of the courtyard and basketball court.

The official unveiling was a chance for students and the School community to say thank you to all those involved. A plaque acknowledges the hours of work done by Artist in Residence Ms Tanya La Paglia in assisting students.  Others involved include Year 10 student Kaelan Durbin, who helped draw the animals, Art Aide Mr Brad Trost, Mr Alan Spinks, Art Teacher Mrs Rebecca Terry who coordinated the whole project and the Maintenance Team who had the challenge of installing the mural on the wall.

The mural depicts symbols of the school's rich history and traditions in the context of the "magic" of childhood, featuring the four 'house' animals - the Stephens yellow Lion, the Buckland red Eagle, the School blue Ram and the Thorold green Stag.

The building shown in the mural is an interpretation of the old Hutchins School in Macquarie Street.  The trophy in the tower is the Warwick Carter Cup. This is the cup awarded in Junior School at the end of each year to the House that has received the most House certificates recognising boys giving of their best in a variety of domains.

The end result is a powerful symbol of co-operation and collaborations which brought it to completion - of the strength of our School community, its deep connections to the past and its potential for the future.

It's hoped this very special mosaic will form the backdrop for happy memories for many young students to come.