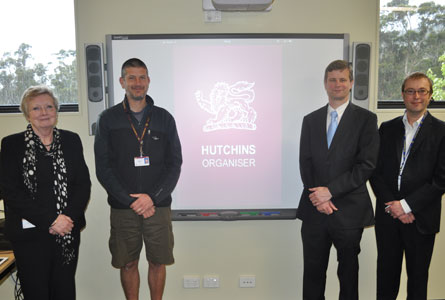 It was with great delight that our ICT team formally launched a the new “Hutchins Organiser” app.

In a first for any Australian school, the Hutchins Organiser application helps students plan for day to day school life via their mobile devices by providing access to their class timetables, reminders such as uniform requirements, homework due dates and special dates in the School calendar. It also has features designed to allow students to interact with teachers and download material for schoolwork.

The development of the app was very much a team effort. Our ICT Team of Dr Jill Abell and Mr Ian MacRae worked with developers at GetBusi and several Year 9 student IT leaders to create the app. Input for design and testing was also received from Mr Brett Smith and Mr Ken Kingston.

The app has already received media attention, with Dr Jill Abell and student Fergus Richardson and his mother Mrs Jane Richardson interviewed on ABC Breakfast Radio. Dr Abell and Fergus were then interviewed by 101.7 HOFM for their local news, with Dr Abell also interviewed for an extended feature interview on Ultra 106.5 during drive time.

Below is the media release that explains some of the features and benefits of this clever app:

Being organised is not usually a trait associated with teenage boys, but a new application launched by The Hutchins School in Hobart is helping address this – much to the delight of parents and teachers.

“I no longer have to worry about bits of paper everywhere, on the fridge, in the bottom of school bags and constantly checking Fergus’ paper diary.”

“Fergus is able to organise himself, he knows what uniform he needs, when his homework is due and what sports games and events are going on at school.”

“It’s a fantastic time saver for me as a working mum.” Mrs Richardson said.

The Hutchins Organiser was originally created as a joint project between students, developer Robert Gowty from GetBusi, In-tellinc and the School’s ICT department for the School's off campus “Power of 9” Year 9 program.

Year 9 student Fergus Richardson says the application has made being a student less stressful.

“Being part of the Power of 9 program off campus means that the timetable is quite different and I need to keep a close check on events and excursions. I always have my timetable handy and can read the Daily Bulletin.

“The app will also soon have handy links to some of our e-text books stored on it as well, such as our class novels or Science prac books so we can record our results on an excursion.  Our Science and Maths teachers are also developing features for the app,” Fergus says.

The Hutchins School's Director of Information Services, Dr Jill Abell says rather than ban mobile phones, the school has chosen to embrace the technology and “power up” students to use devices appropriately so they are better equipped for the real world.

“Most workplaces now accept the role of the personal device – such as a smart phone – always being present, and in fact, often provide them. Organisations now harness the impact of social networking tools and apps for marketing, market analysis, and reputation building. Employers and tertiary institutions expect an experienced and mature approach to the use of these devices in the workplace.

“We have protocols, policy and monitoring in place for appropriate and safe use of mobile devices,” Dr Abell said.

Developer, Mr Robert Gowty from Tasmanian-based IT company GetBusi, says there is huge potential for the application to be developed and refined further, as a cutting edge technology for schools – with the help of students.

“This project is unique in the way students have been engaged in the design and specification process.”

“Not only does it make the lives of students and parents easier, it has implications for teachers such as increased productivity through time saved in chasing up students – it can all be done via the app,” Mr Gowty said.

It gives students quick access to all the latest school information including the Hutchins Central website, the Daily Bulletin and Communique. Students can instantly access information such as the School Song, School Rules and the library catalogue,” Mr Gowty said.