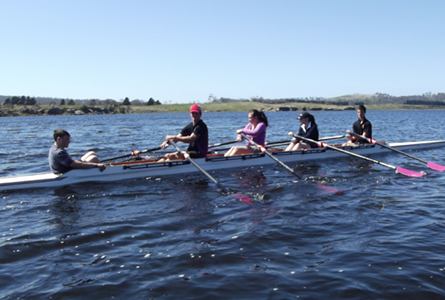 A trip to Oatlands in Tasmania’s Midlands has provided Year 9 students with a unique opportunity to share their skills and experience a slice of Hutchins rowing history.

A group of Year 9 students, accompanied by Hutchins parents Mr Andrew Hall and Mr Andrew Fisher have volunteered their rowing skills to conduct a workshop at Lake Dulverton with students from Oatlands District School.

The exercise was included as part of an extension program at Oatlands District School run by Mr Rod Headlam. The program is aimed at providing the rural students with opportunities to experience activities they may not otherwise have considered.

Hutchins parent and rowing coach Andrew Hall says students from both schools benefited from the exercise.

“The idea was to get some boats on the lake and a bit of interaction between the two schools,” he said.

“It also coincided with the fact Lake Dulverton hasn’t had any water in it for a while.”

For Andrew Hall and Andrew Fisher – both Hutchins Old Boys – the trip sparked some memories.

“Hutchins used to row the lake in regattas in the early 1980s, it was good to have rowing on the lake again.”

“The boys were very patient, and represented the school well.”

The student’s trip featured in The Mercury newspaper.