Headmaster ‘takes a jump’ for research 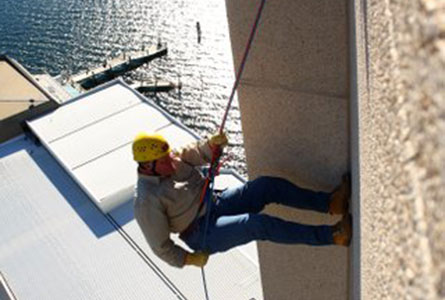 The Hutchins School Headmaster Mr Warwick Dean has abseiled off one of Hobart’s most iconic buildings – all in the name of research.

On a spectacular clear winter’s day, Mr Dean delighted onlooking tourists and media as he abseiled from the top of Wrest Point Casino’s 60 metre tower, as part of his pledge to help raise awareness and funds for The Royal Hobart Hospital’s Research Foundation.

“When times are tough, research is something that suffers,” Mr Dean said.

“I hope that the concept of ‘heaving the Headmaster’ will be a way to gain people’s attention, and encourage donations.”

Despite slightly windy conditions, Mr Dean made the descent with ease, and was closely followed by Tasmanian Police Commissioner Mr Darren Hine, who is also helping to raise funds for the Foundation.

The abseil was a preview of the RHH Research Foundation’s fundraising event The Edge, to be held on August 25, which will see about 60 people complete the descent to raise awareness and funds.

We invite all members of the community to donate to this worthy cause. Your donations are greatly appreciated by the Foundation.