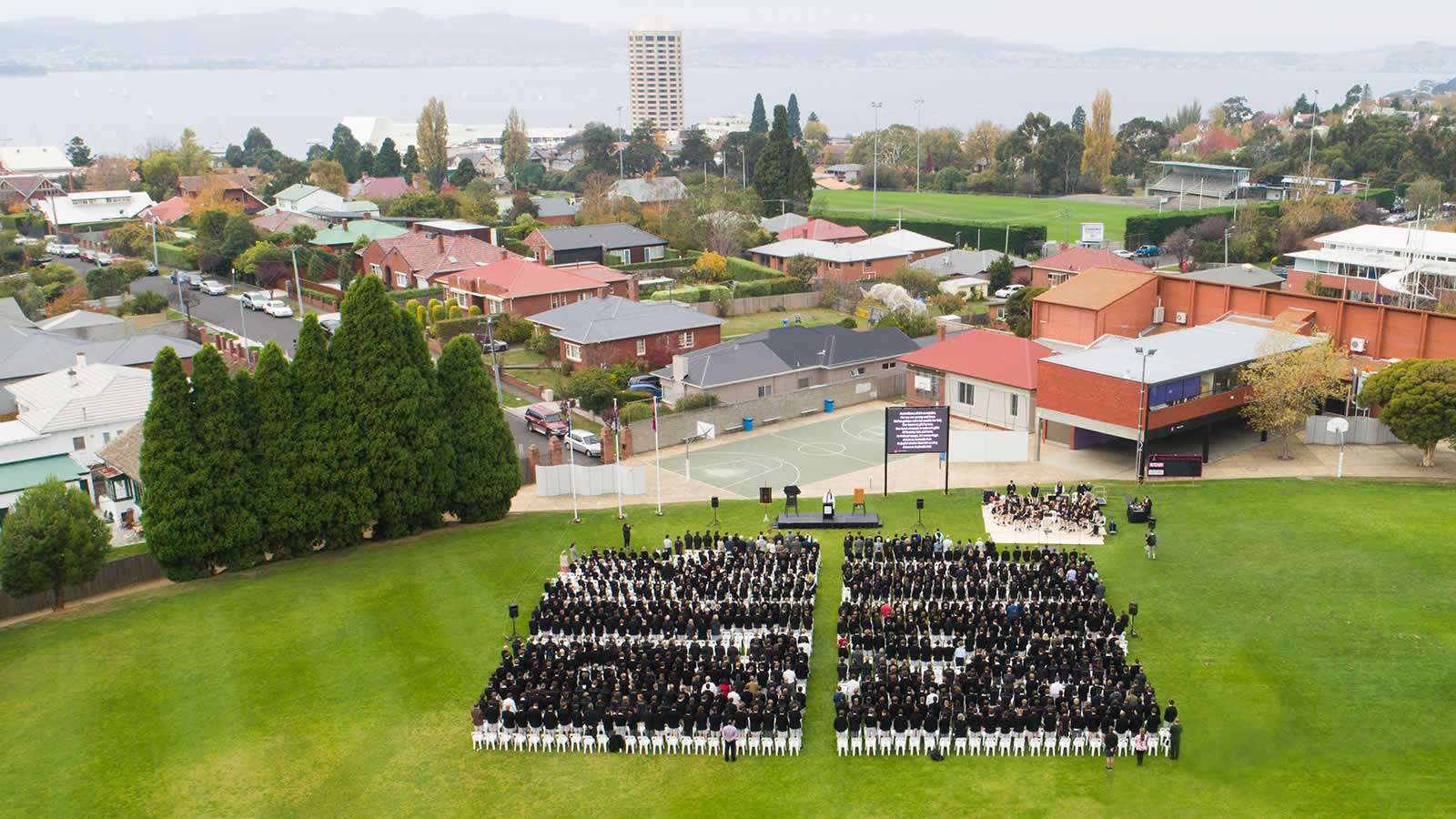 Each year we commemorate the sacrifices and courage shown by thousands of young Australians and New Zealanders at the annual ANZAC services across this country and on the fields in far-away lands where Australian and New Zealand troops fought so bravely.

So profound has been the impact of war on communities large and small that in the very large majority of country towns you visit, regardless of size, in all Australian States and Territories, you will find in the main street a cenotaph or memorial to fallen soldiers. We have our own memorials marking those old Hutchins boys and staff who served and those who died fighting for this country. They hang in the chapel, in the museum and the oval we have gathered upon for this year’s ANZAC Day Service is the War Memorial Oval.

This year our ANZAC Day Service was especially significant as we mark 100 years since our involvement in World War I. This unprecedented service was held on the War Memorial Oval where over 1,000 students, staff and invited guests joined together to honour the service and sacrifice of our original ANZACS, and the generations of Australian servicemen and women who have defended our values and freedoms, in wars, conflicts and peace operations over the past 100 years.

We welcomed Commander Charles Rex (’65), retired, who as an Old Boy left Hutchins in 1963 to commence a long and distinguished career in the Australian Navy from 1964 to 1995. We were honoured to invite Charles to address our school community at this important occasion. Charles shared with us his story of leaving Hutchins in 1963 to complete his last two years of schooling at the Naval College in Jervis Bay before being posted in Vietnam. Charles saw active duty in Vietnam as a naval pilot, flying helicopters and overseeing daily missions before returning to Australia and continuing a remarkable career as a navy pilot. We were honoured to have Commander Rex join us for this year’s service and to unveil a newly commission Honour Board to commemorate Old Boys who served with the Australian armed forces post-World War II.

Our Headmaster, Dr Rob McEwan, shared the story of the battle at Lone Pine. The battle is named after a single pine tree that stood on the top of a ridge. This tree served as a landmark and the area became known as Lone Pine. This fierce battle in August of 1915, saw more the 2,000 Australians and 7,000 Turkish troops killed in hand to hand combat.

The solitary pine was destroyed in the shelling but the site remained known as Lone Pine. It was to become a poignant symbol of the ANZAC spirit, kept alive decades later in Australia through a son’s love for his mother.

Lance Corporal Benjamin Smith, whose brother Mark was killed in the Battle of Lone Pine, collected cones from the branches used to cover the trenches. He sent them home to his mother in New South Wales, in commemoration of his brother.

Mrs McMullen kept the seeds sitting in a drawer for 13 years before planting them in 1928 and producing two seedlings. One was planted in their home town of Inverell where her sons had enlisted. The other was planted in the grounds of the Australian War Memorial site in 1934 to honour all those who fell at Gallipoli.

Today the Lone Pine is anything but lonesome. Thousands of trees have been cultivated from the Australian War Memorial’s Lone Pine and planted all over Australia. One of these pine trees stands between the two tall hedges on the War Memorial Oval. This pine tree was presented to the School on Remembrance Day, 11 November 2005 by RSL President Mr Ian Kennett and Senator Guy Barnett. This pine tree is a direct link to the Lone Pine found on the Gallipoli peninsula, and represents more than a terrible battle where so many lives were lost, but also the bravery, sacrifice and mateship that are part of the ANZAC spirit. This year, State RSL President Mr Terry Roe unveiled a plaque to mark this important tree, this symbol of the ANZAC spirit.