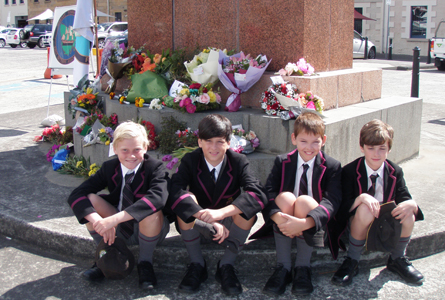 Representatives from Year 5 recently attended the annual Floral Tribute to commemorate the arrival of Lieutenant Governor David Collins and his party in 1804 at Sullivans Cove.

Participation in this event stemmed from part of the National Curriculum History for Year 5 under “Knowledge and Understanding”; “Reasons (economic, political and social) for the establishment of British Colonies in Australia after 1800”.

Students investigate the founding of the settlement, the reasons for the locations and the patterns of settlement and the stories of significant individuals and groups in the development of the colony.

Our classes brainstormed the ten necessary items we would need to survive on a deserted island in order to survive. In groups the boys were asked to design an island with a major river, a mountain with a forest, a deep water port and flat land on which to settle. These islands were then modelled using paper mache. It did not take much for the boys to realise that these islands were very similar to Tasmania. We then talked specifically about the settlement of Hobart. We visited the initial site at Risdon Cove, accompanied by Historian Reg Watson – an expert in this area – and discussed why this settlement did not survive, and was moved a year later to Sullivans Cove.

We then travelled to Sullivans Cove and explored the area around Hunter Island and met Archivist Margaret Mason-Cox who explained about the people who came with the First Settlers.

The First Settlers Association invited our students to their annual remembrance service. We were only able to take two boys from each class to represent us. We shall cherish this valuable contact.