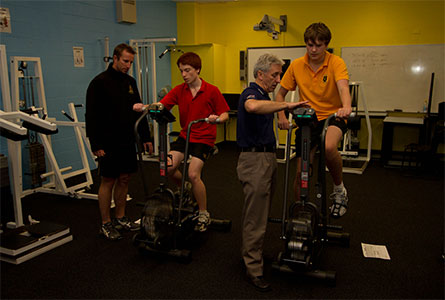 Mr Grant Pryor put students through their paces with exercises such as leg strength tests, arm presses, arm pulls and a maximum endurance test on the stationary bike.

Mr Pryor said he was very impressed with The Hutchins School’s enthusiasm, support of and success in the sport of rowing, and hopes to see more rowing success stories, such as Old Boys Olympian Tom Gibson (’00), and AIS Junior Team member, Year 12 student Sam Heron.

“We feed the data that we’ve gathered into a national database and that will provide comparative feedback for the School and students against other school students of the same age from across the nation,” Mr Pryor said.

“Each student will receive a separate communication to indicate how they went individually – there are no negative outcomes, it’s all very positive.”

“Hutchins are the first school in this age group to be tested in the state. The data may be used in the future for any students that progress in the sport. It means the School, the student and the sporting administrators can monitor the progress of the athlete.”

“This testing is designed to be non-sports specific, it’s about general leg and arm (capacity) and sports endurance.”

The testing is part of Rowing Australia’s national program of testing in schools, which involves the use of identical exercises and equipment.