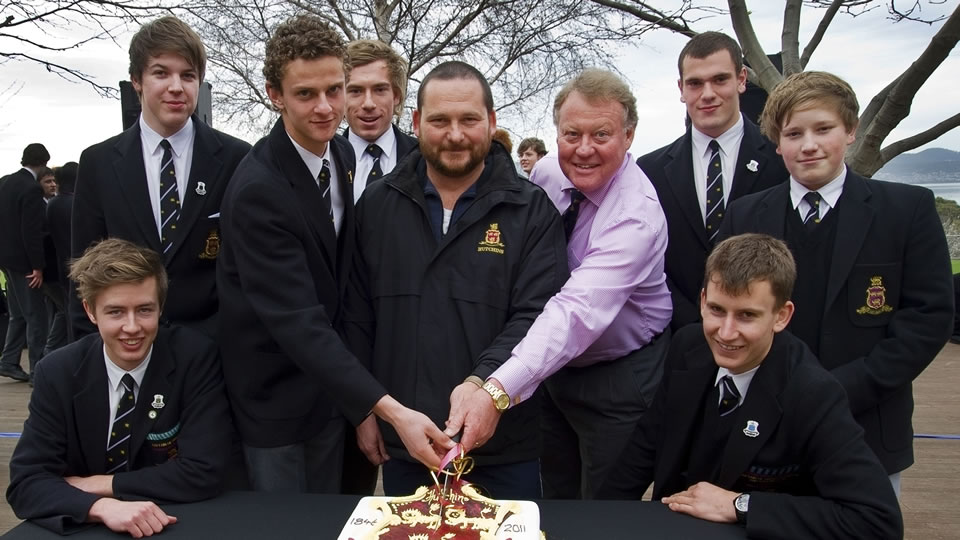 The School’s 165th birthday has been marked in true Hutchins style with a suite of events offering ways for every member of our community to celebrate.

Our younger students treated guests, staff and classmates to an entertaining mix of musical items. Performances included Keith Sharp’s  Chicken in the Kitchen sung by the Treble Singers and accompanied by the Junior Strings, Jack Johnston’s With My Own Two Hands sung by Year 5K and Joyeux Anniversaire (happy birthday) sung by Year 1M. Mrs Jenny Manthey spoke to the boys about our inspiring “Hutchins Lions”; our distinguished Old Boys. Mr Gene Phair also gave an address. After the service, in keeping with School tradition, the Junior School and Early Learning Centre’s anniversary cake was cut by the youngest student, Joshua Zeeman and oldest student Daniel Kelleher.

The School’s official birthday on Wednesday 3 August began with the traditional Anniversary Service at St David’s Cathedral. The presentation of Anniversary Ties was one of the highlights of the service, with ties presented to the following students:

Students and staff then returned to School for a BBQ lunch in the Senior School Quad and after much anticipation, the delicious anniversary cake was cut by Headmaster, Mr Warwick Dean, Mr Ralph Jackson (representing The Hutchins School Old Boys Association) and School Captain, Charles Haward.

This was followed by a hearty rendition of the School Song led by the Year 12 students, and the School War Cry. Our very own Mrs Jane Heazlewood then led students and staff in singing “happy birthday” to the School.

A slice of cake, provided students with the energy to watch (or play) in the Old Boys v Students touch rugby game. The Old Boys won the day, with star performances by James Kirkland, Edward Salter, Rob Holmes and Charlie Holmes.

Following the clash of the brawn, was a clash of the brains, as the Old Boys again took on the students in the traditional Anniversary Debate. This year’s topic “That it’s now all about spin” sparked some entertaining arguments. Of particular note was a mathematical analysis of “Spin Formula” by Mr James Seddon. In a closely fought debate, the students were declared the winners, retaining the trophy for another year.

What better way to end one of the busiest days on the School calendar with a well-earned cocktail. More than 100 members of the Hutchins community attended the Anniversary Cocktail Party and Art Auction. Guests enjoyed a selection of cocktails, and performances by Blue Note Duo, the Hutchins String Quartet and the Hutchins Piano Ensemble.  The fun of the evening continued as guests were invited to turn their attention to the artworks up for auction, and the bidding began.

The Hutchins School Jazz Night “Jazz @ Hutchins” on Friday evening provided another opportunity for the School to showcase its musical talent. More than 130 people attended, enjoying a range of great performances by the Music faculty led by Mr Scott Cashion.

Thanks to students and staff for helping to make the week a success, especially Reverend Canon Matt Gray, the Music Faculty, Mrs Shirley Els and Mrs Cheryl Jones (Administration) for their help with programs and printing, and GAP students Davis Midzi, Brandon Payne and Rerekohu Pewhairangi.

As well as being a great opportunity to celebrate the 165 years of proud history, the week has once again renewed connections between the Old Boys, staff, students and all the members of the community that make up the Hutchins family.