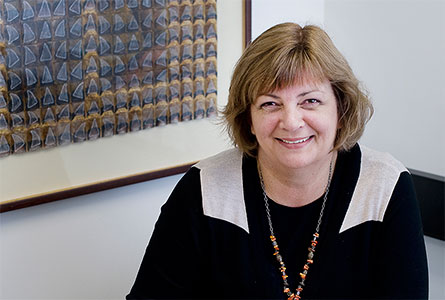 From an Accounts Clerk at the CBA bank in the semi-rural municipality of Sorell, to overseeing major infrastructure projects and managing the resources of one of the most prestigious schools in the country – the career journey of our Hutchins Business Manager Jenny Self has been characterised by success in overcoming economic and organisational challenges to help grow and develop businesses.

Now, Jenny’s achievements have been honoured by one of the most sought-after industry accolades; she was named as a Finalist in this year’s Telstra Tasmanian Business Woman’s Awards.

Jenny says for a representative of a school to be recognised under the Community and Government category of the Awards provides an opportunity to open people’s eyes to the multi-faceted nature of independent schools.

“It’s the first time a Tasmanian school has been recognised as a finalist,” she said.

Jenny says her award submission was a chance to showcase the work that goes into ensuring schools such as Hutchins can maintain the support needed to continue to provide outstanding educational opportunities.

“Because independent schools are not-for-profit, we are dependent on support from parents and government, which provides challenges” she says.

Jenny says the award is also a great way to recognise the types of work women do.

Among Jenny’s many achievements as Business Manager at The Hutchins School are: the project management of major building works including the new Library (the Nettlefold Library) and the major, multi-million dollar redevelopment of The Hutchins School Boarding House – Burbury House – into a world-class boarding facility; the implementation of safety management systems, and the rollout of strategic plans, business plans and building master plans.

On a day-to-day basis, Jenny also manages the running of the School’s material and financial resources; including everything from uniform development and book sales, to accounts and grounds maintenance. In addition to carrying out this demanding role, Jenny has recently completed a MBA.

“I wish to thank the School for their support, and I feel this award is really recognition of the wonderful community we all work in,” she said.

And it’s a community which views Jenny is as an integral part of its success.

Jenny is a Fellow of the AICD, a member of Rotary Hobart, a mentor for GIRL (Girl In Real Life Program) – a mentoring program for ‘at risk’ girls; has worked in the role of Bench Justice at the Hobart Magistrates Court, is a Justice of the Peace, and has just been appointed to the Board of Anglicare.