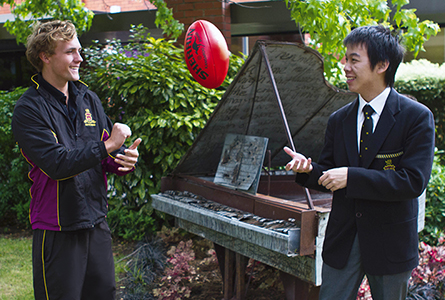 The Hutchins Leavers of 2012 are an unusually talented group. Among them are a national champion rower, the Tasmanian TQA Art Prize winner, national athletics medal winners, dance scholars and a young TSO musician.

These students credit the ‘balance’ provided by pursuing their co-curricular passions for their academic strength.

They say while their leaving group contains a raft of boys who achieve excellent academic results, there is no ‘academic’ stereotype – over the course of the year you would have been just as likely to find one of these boys taking a break from the science lab to go sailing; or heading up a debating team after a dance rehearsal.

Jeremy Yang, 18, was awarded the prize for Dux of The Hutchins School in 2012. An accomplished pianist, Jeremy has already played with the TSO, having won the orchestra’s Rising Star Award in 2011.

Jeremy achieved an ATAR of 99.9, receiving a first round offer to study Medicine at the University of Tasmania.

“Your typical academic achiever might be expected to focus solely on the end of year exams,” he said.

“We all have the opportunity to do a huge range of activities on top of study.”

“My music has been my ‘relaxing thing’ to do after school and before study – it has helped me manage the pressures of Year 12! For other Hutchins students, their outlet could be sport, for example,” he said.

Fellow 2012 Leaver Max Heerey achieved a score of 83.5, allowing him to achieve his goal of entry into a pre-physiotherapy course at Griffith University.

This year, Max stroked the 1st VIII Rowing crew, was Captain of the Waterpolo team and played in the first XVIII Football team.

“Being involved in sport certainly helped me build a strong work ethic and learn better time management,” he said.

The students say while talents vary widely, there is a mutual acceptance and admiration among this high-achieving group.

“Everyone supports each other really well and friendship groups have students with a mix of interests,” said Max.

“We have lots of talent in our year group, I really look forward to seeing the names of our year group everywhere; it really is quite an extraordinary group,” Jeremy said.