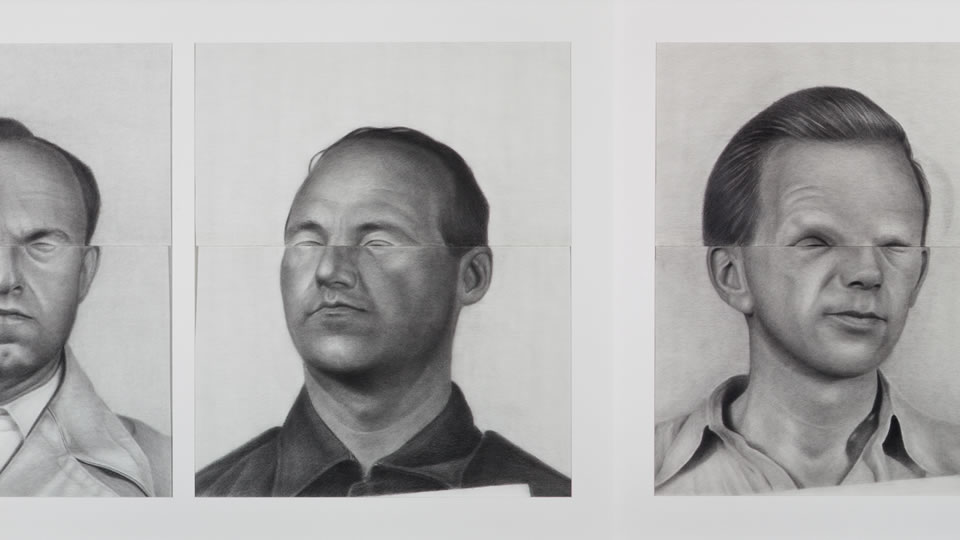 The 13th Hutchins Art Prize has been won by a Western Australian artist Thea Costantino for her stunning graphite portraiture, with the prestigious Hill Ross Award going to a haunting piece by high-profile Melbourne Artist Paul White.

The prestigious Hutchins Art Prize award has fast gained a national reputation as one of the major awards for works on paper. The event encourages both established and emerging artists to submit their works, ensuring a freshness of presentation in the exhibition.

The event is always well attended by members of the local arts community and VIPs. The last Hutchins Art Prize Exhibition held in 2011 was attended by over 2000 people over its week-long run. This year’s award saw 340 artists enter, with the works of 60 finalists to be displayed at the Long Gallery over 12 days.

The first prize of $15000 for has been won by Thea Costantino for her work The Fold I and II diptych. The work is a beautifully rendered graphite drawing folded across the four portraits at the eyes, conveying a sense of enigma, absence and mystery. Thea is an interdisciplinary artist and academic who holds a PhD from Curtin University, where she works in the School of Design and Art. Thea is also a member of the Board of Directors of Perth Institute of Contemporary Arts and is a recipient of the 2011 Qantas Foundation Encouragement of Australian Contemporary Art Award.

The Hill Ross Award valued at $2000 was won by Paul White from Melbourne with his pencil rendering Aloha Mojave. This stunningly rendered, somewhat haunting coloured pencil drawing captures the gutted fuselage of an abandoned aircraft floating on a white background. The California Institute of the Arts Graduate has won aswag of high profile awards including being a finalist in the MyArtSpace New York New York competition.

The Artery student award for $1000 worth of Art materials is Robert Mihajlovski for his work Abbotsford.

The Exhibition is open from Tuesday 15 October – Sunday 27 October 2013 at the Salamanca Long Gallery.