A goal for mental health 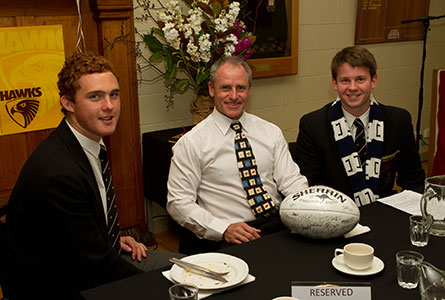 Funds raised for the charity beyondblue have been tallied, with The Hutchins School Prefects now able to confirm $800 has been raised for the organisation. 2012 School Captain Sam Johnston explains how they did it.

The Hutchins Prefects have run the AFL Grand Final Breakfast for almost three years now. Each year the event raises funds for a specific cause or charity. We are excited to confirm that this year saw the event raise a total of over $800 for beyondblue (www.beyondblue.org.au), an organisation whose aim is to assist those suffering from conditions such as depression and anxiety.

This year’s guest speaker was Andrew Bews. Andrew played over 200 games for Geelong, captaining the team during 1990-1991. He kicked a total of 132 goals during this time, including the ‘goal of the year’ at Kardinia Park.

Andrew was also selected for the All Australian Team in1987 and 1989, winning the Simpson Medal for ‘Best on Ground’ while playing for Victoria against Western Australia. He has a son, Jed who is playing for Geelong in the VFL alongside Hutchins Old Boy, George Burbury (’10).

No stone was left unturned in Andrew’s evaluation of the game, past and present. Delivered in his energetic and passionate manner (often with a hint of tongue-in-cheek humor), Andrew had the audience laughing and reminiscing over the legends who played in their era. The event concluded with Andrew kindly donating a Geelong football to the School, signed by the 2012 team.

All of this could not have been possible without the immense support of the Prefects, Adam Aitken and his catering team, Ms Jenna Vance and Mr John Devine who all contributed to making this a great event. We hope this tradition continues on into the future.